A Wisconsin university teaching assistant resigned from their job after admitting lying for years about being black.

CV Vitolo-Haddad confessed that she was actually of southern Italian and Sicilian origin not black or Latino as colleagues at the University of Wisconsin-Madison had assumed.

“When asked if I identify as black, my answer should always have been ‘No,’” the teaching assistant admitted in a September 8 post.

“There were three separate instances I said otherwise.

‘I have let guesses about my ancestry become answers I wanted but couldn’t prove,’ Vitolo-Haddad wrote earlier in a 6 September post.

‘I have let people make assumptions when I should have corrected them.

‘I take full responsibility for spreading these lies and am deeply sorry.’

The post added: “I want to apologise for ever taking lies about Cuban roots at face value, and for subsequently attaching myself to people’s perceptions of me as though it would provide answers where there are none.” 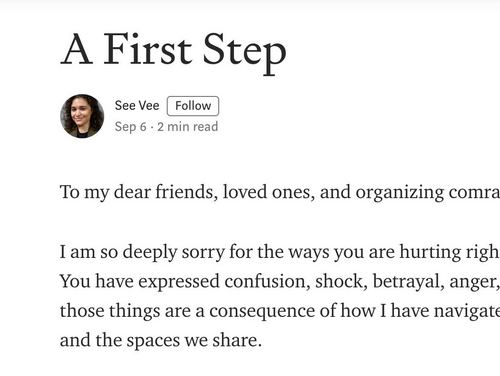 Vitolo-Haddad is a PHD candidate at the School of Journalism and Mass Communication and had a teaching assistant position, from which she has now stepped down, also resigning as co-president of the university’s chapter of the Teaching Assistant’s Association, which is a graduate student union.

Vitolo-Haddad later admitted to ‘insidehighered.com’ having benefited “socially” from the situation, but had never applied for scholarships, fellowships or awards for people of colour or identified as Black on any paperwork.

The confirmation comes just weeks after George Washington University professor Jessica Krug, an African historian who is white, was revealed to be a black imposter.

Krug later blamed her actions on past trauma and mental health issues.

In 2015 Rachel Dolezal, a former NAACP chairperson in Spokane, Washington, was outed as being white despite claiming she self-identified as black.

UW-Madison spokeswoman Meredith McGlone that Vitolo-Haddad was no longer a teaching assistant at the university.

“UW-Madison expects that people represent themselves authentically and accurately in all aspects of their academic work,” McGlone told the university’s Daily Cardinal.