A Russian sushi restaurant has stood up to racist attacks by a far-right hate group after another sushi chain was forced to take down its ad featuring a black model.

On Monday, the YobiDoyobi sushi chain pulled its ad that featured a black model and publicly apologized after being targeted by the “Male State” group. YobiDoyobi co-founder Konstantin Zimen said he and his business received a barrage of threats and abuse by the “Male State” after its founder Vladislav Pozdnyakov shared the ad on the group’s Telegram channel that has some 90,000 subscribers.

Later that day, another popular sushi chain, Tanuki, took a stand against the group’s attacks.

“We will continue to post photos of wonderful people representing different religions, nationalities and sexual orientations on our social media,” Tanuki said in an Instagram post that featured a black model standing next to a white model. “We are certain: None of these attributes define a person.”

Following Tanuki’s statement, Pozdnyakov threatened to “paralyze” the restaurant’s operations unless it deleted the marketing materials and issued an apology “to the Russian nation for imposing alien values on them.” 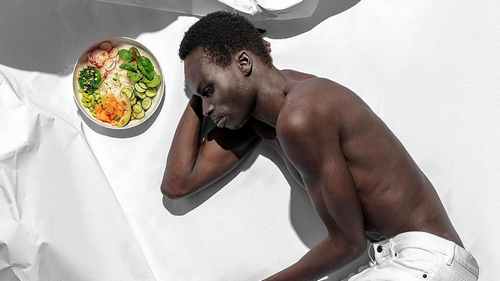 The restaurant’s website then went down for several hours and “Male State” followers ordered from Tanuki en masse and refused to pay, Meduza reported Tuesday.

Pozdnyakov later warned his followers on Telegram to halt their attacks through Yandex Eda after speaking to an unnamed “well-known” person, saying they could face administrative hooliganism charges.

Pozdnyakov himself was convicted of inciting hatred toward women and handed a suspended sentence in 2018, a sentence that was later overturned, while “Male State” was banned from the VKontakte social networking site in 2020 for “incitement to violent action.”

When asked about the influx of attacks coming from the “Male State” on Tuesday, Kremlin spokesman Dmitry Peskov said “We’ve seen the media reports, but to be honest, it’s definitely not our prerogative.”