In 2014, Supreme Court Justice Ruth Bader Ginsburg, the pioneering legal mind and advocate for equal treatment of the sexes, did something that probably none of her male colleagues were ever asked to do: she gave a tour of her office closet.

The occasion was an interview with Katie Couric after Ginsburg’s strongly worded, 35-page dissent in the Burwell v Hobby Lobby decision, in which the court sided with a corporation’s desire to challenge the Affordable Care Act’s contraception mandate on the grounds of religious freedom.

But Ginsburg did not seem remotely put out about starting the conversation with fashion.

Opening the imposing wood doors of her wardrobe, the justice revealed, on one side, the long black robes of the court, and on the other — taking up more than half the hanger space — her extensive collection of elaborate collars. She had them, she said, “from all over the world”. She had them for every occasion, and for every kind of opinion of the court.

As much as the nickname “The Notorious R.B.G.”, which came to symbolise Ginsburg’s status as a pop culture hero in her later years, the collars served as both semiology and semaphore: they signalled her positions before she even opened her mouth, and they represented her unique role as the second woman on the country’s highest court. Shining like a beacon amid the dark sea of denaturing judicial robes, Ginsburg’s collars were unmistakable in photographs and from the court floor.

Though obviously Ginsburg’s legacy of jurisprudence is her most important gift to history, her understanding of her own significance as a role model was undeniable. As the rare female law student (and student in the rarefied air at the top of the class) — not to mention the rare female lawyer — she was used to being the only one. She knew that every statement she made, every gesture, every image, would be noted, picked over and parsed. All her choices mattered. So she might as well imbue them with meaning.

Even if they were only about the collar. 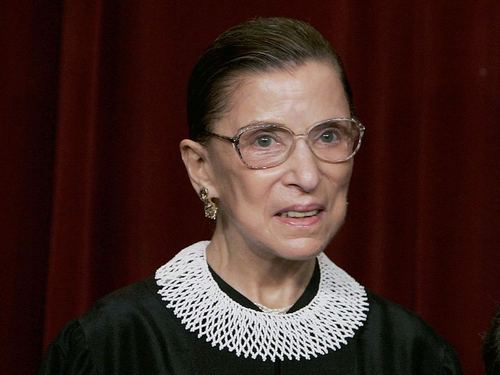 In 2009, in an interview with The Washington Post, she explained how her collection originated: “You know, the standard robe is made for a man because it has a place for the shirt to show, and the tie,” Ginsburg told the paper. So she and Sandra Day O’Connor, the first female justice on the court, “thought it would be appropriate if we included as part of our robe something typical of a woman.” They weren’t going to obscure their sex or pretend it was beside the point. It was part of the point.

The idea was to claim what was a traditionally male uniform and unapologetically feminise it. That may seem innocuous, but it was in fact radical. In 1993, when Ginsburg joined the court, women in the workforce were still largely wearing men’s suits as armour; conventional wisdom had it that looking too “girly” was a mistake and would undermine the seriousness with which a woman was received.

But there’s almost nothing as classically “girly” as lace, that fragile, ethereal fabric associated largely with decoration. By wearing it, and wearing it consistently, Ginsburg — famously tiny, famously tough — was daring the world to revise that judgement. Why could a woman not be both feminine and substantive?

Her affinity for collars became so well known, fans began to send her their own creations as gifts, and she wore those with pride, too

As Marylou Luther, creative director of The Fashion Group International, once said: “For this woman who has championed women’s rights, it’s lovely to see that she’s championing ladies’ rights. It’s OK to be a lady. You don’t have to be a CEO in pantsuits.”

Ginsburg liked fashion, and she wore it with pleasure: in addition to her collars, she was known for her fishnet gloves (worn for her portrait in Time’s “100 Most Influential people” issue in 2015), embroidered jackets, and in February, a pair of glittering silver heels, like Dorothy’s ruby slippers, that she wore to present the Justice Ruth Bader Ginsburg Woman of Leadership Award in Washington DC.

But her collars were her weapon.

She used them to expand, ever so slowly and deliberately, in the same way she did the law, the landscape of our own understanding.

She wore her majority opinion collar, a beige and egg yolk yellow crocheted style suspended from a gold chain, with beaded drops at the hem, that was a gift from her law clerks, when speaking for the majority of the court.

Her dissent collar, a spiky bejewelled necklace on a black band from Banana Republic that had been gifted to her when she was named a Glamour Woman of the Year in 2012, she wore when she read her equally spiky dissents from the bench. (She also wore it the day after the 2016 election, which no one thought was a coincidence; the dissent collar became so famous on its own that it was memorialised in jewellery, magnets and temporary tattoos.)

Her crisp white jabot edged in black (from the gift shop of the Metropolitan Opera), which was a replica of a similar jabot worn by a character in a Verdi opera she had attended, she wore when she received her honorary law degree at Harvard (along with Plácido Domingo, who serenaded her). And then there was her favourite: a delicate white style from Capetown, South Africa.

Her affinity for collars became so well known, fans began to send her their own creations as gifts, and she wore those with pride, too.

When, in 2018, a documentary on her life called RBG was released, the poster featured only a sketch of Ginsburg’s head — along with a lace collar. The film’s first poster, in fact, simply featured the collar and the title; it was all that was needed.

Later, movie theatres placed cardboard cutout figures of the Supreme Court justice in lobbies so attendees could take selfies with their heads framed by her black robe and elaborate lace collar. After her death was announced Friday, many social media posts simply depicted a collar against a black background.

After all, a gauntlet may once have been a metal glove, but sometimes it can also be a lace collar. That doesn’t make it any less effective at challenging an antiquated status quo. 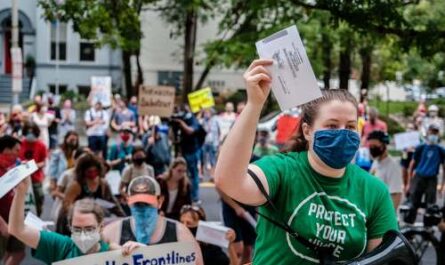