At the end of the 19th century, the director of the Imperial Ballet in St. Petersburg, Ivan Vsevolozhsky, had an idea for a ballet based on a tale by Charles Perrault called “La Belle au bois dormant.” Vsevolozhsky wrote the scenario and sketched the costumes for the ballet, which would be called “Sleeping Beauty,” and asked Pyotr Tchaikovsky to compose the score and Marius Petipa to choreograph it. The lush production of dance and pantomime premiered in January 1890 and became one of the Mariinsky Theater’s most popular ballets.

In 1892, it became perhaps even more popular when the role of Aurora went to Mathilde Kschessinska, the mistress of Nicholas II.

Over time, changes crept into the choreography and the ballet and sets began to be considered old-fashioned and worse for wear. The production was redesigned by Konstantin Korovin in 1914, and again by Tatiana Bruni in 1943. By the second half of the 20th century, the changes to the choreography, scenario and design resulted in almost an entirely different ballet.

But in 1999 the choreographer Sergei Vikharev used Nikolai Sergeyev’s notation kept in the Harvard Theater Collection to restore the original choreography. Sets and costumes were revived from sketches and photographs in the St Petersburg State Museum of Theater and Music and the St Petersburg State Theater Library. This “authentic” version premiered on April 30, 1999. 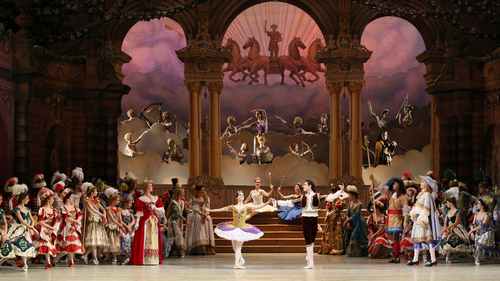 Since 2018, there have been two “Sleeping Beauties” in Russia’s repertory: the “Soviet” version and the “original.”

If you happen to be in St Petersburg, this weekend you can see the original version danced by Olesya Novikova and Viktoria Tereshkina as Aurora and Vladimir Shklyarov and Xander Parish as Prince Désiré. The conductor is Valery Ovsyanikov.

If you don’t happen to be in St. Petersburg this weekend — but you do read a bit of Russian — you can learn all about the history of “Sleeping Beauty” in this marvelous virtual exhibition.