It was a moment that had been a long, long time coming, and when it did Kamala Harris grasped it with both hands.

On a night freighted with history, the senator from California officially accepted the Democratic Party’s nomination to be vice president, the first woman of colour thus selected by a major party, and only the sixth woman in total in the US ever added to a ticket.

In a speech that spread over more 15 minutes, and perhaps representing the de facto keynote address on the third night of the convention despite top billing going to Barack Obama, her words were at once warm and hopeful, yet firm.

She paid respect to the political pioneers that had gone before her, breaking the ground that would help allow a black American woman of South Asian heritage, build a career such as hers.

And she paid tribute to her family, particularly her mother, Shyamala Gopalan Harris, who came to the US at the age of 18, and raised Kamala and her sister after their parents divorced. She died in 2009. Ms Harris said that when her mother gave birth to her, aged just 25, at Kaiser Hospital in Oakland, California, she may have struggled to see just what lay in store for her daughter.

“On that day, she probably could have never imagined that I would be standing before you now speaking these words: I accept your nomination for vice president of the United States of America,” she said. 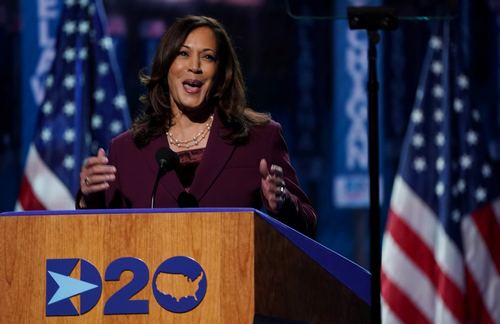 Ever since Joe Biden indicated in March of this year that were he to secure the nomination he would choose a woman as his running mate, there had been widespread anticipation he would select a woman of colour. Such a strategy appeared all the more vital and fair, following the killing by police in Minneapolis of an unarmed black man, triggering protests for racial justice that swept not just across the US, but around the world.

In selecting the 55-year-old former prosecutor, Mr Biden said his main priority had been to find someone who could step into the job on day one, not merely a sound bite for a 77-year-old man, who will be the nation’s oldest president by far should he defeat Donald Trump in November.

In her comments, Ms Harris noted that this week marked the 100th anniversary of the passage of the 19th amendment, which gave some women – white women – the right to vote.

“So many of the black women who helped secure that victory were still prohibited from voting, long after its ratification. But they were undeterred,” she said. “Without fanfare or recognition, they organised, testified, rallied, marched, and fought-not just for their vote, but for a seat at the table.”

She added: “These women and the generations that followed worked to make democracy and opportunity real in the lives of all of us who followed.

“They paved the way for the trailblazing leadership of Barack Obama and Hillary Clinton. And these women inspired us to pick up the torch, and fight on.”

She named several female civil rights and political leaders – “Mary Church Terrell and Mary Mcleod Bethune. Fannie Lou Hamer and Diane Nash. Constance Baker Motley and Shirley Chisholm”. Ms Chisholm was both the first black congresswoman and the first black woman to make a run for the White House, back in 1972.

“We’re not often taught their stories,” she added. “But as Americans, we all stand on their shoulders.”

Her comments followed by an equally impassioned and hard-edged address by Mr Obama, who probably for the first time in four years in public, criticised Mr Trump by name. He said he feared for the state of the nation’s democracy should he secure a second term.

“I did hope, for the sake of our country, that Donald Trump might show some interest in taking the job seriously; that he might come to feel the weight of the office and discover some reverence for the democracy that had been placed in his care,” said Mr Obama. “But he never did.“

If Mr Obama’s speech was heavy, and sombre, Ms Harris was able to inject a fair degree of energy into her words. Joe Biden will be relying on this verve to drive his campaign in the final three months, across a country beset by anxiety, economic hardship and the challenge of combatting the coronavirus pandemic.

“Years from now, this moment will have passed,” said Ms Harris. “And our children and our grandchildren will look in our eyes and they’re gonna ask us: Where were you when the stakes were so high? And we will tell them, not just how we felt – we will tell them what we did.”