A Siberian pianist sparked an uproar Tuesday with a speech against “state repression” at a concert honoring Italian-born French concert pianist Vera Lotar-Shevchenko, who spent eight years in a Soviet gulag prison camp in Siberia.

Timofey Kazantsev was nearly hauled offstage at the Novosibirsk Philharmonic after urging attendees to sign a petition demanding the release of a local activist who until Thursday faced 5 years in prison for attending multiple unauthorized protests.

“This isn’t only a cultural, but a political event because we are celebrating a great pianist and condemning the repressive machine that destroyed her life,” Kazantsev said in reference to the 120-year anniversary of Lotar-Shevchenko’s birth.

“It seems quite logical to me to say that … there’s a large-scale machine of political repression currently operating in Russia,” Kazantsev said after performing Beethoven’s Piano Sonata No. 32, Op. 111 to applause. 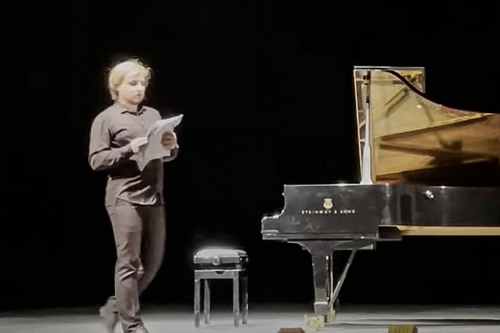 Minutes later, a man in a suit and bow tie appeared alongside Kazantsev, attempting to push him off the stage and saying: “Let me continue the show while you stop all this.” The man left the stage flustered after members of the audience yelled out “Let him speak.”

A spokeswoman for the Novosibirsk Philharmonic Society took the stage at the end of the show to apologize for Kazantsev’s “unplanned” speech and say that the venue had “nothing to do with it.”

A description of Kazantsev’s speech posted on his YouTube page explains that the concert in honor of Lotar-Shevchenko presented an appropriate platform to express his views.

The former Novosibirsk Philharmonic soloist said that he was among the more than 10,000 Russians detained during nationwide rallies in support of jailed Kremlin critic Alexei Navalny that took place in late January and early February.

Navalny was sentenced to two and a half years in a prison colony last month for violating parole while recovering abroad from a poisoning attack last year. The United States and European Union imposed sanctions on Russian officials and state entities over Navalny’s poisoning, which the Kremlin denies, as well as his imprisonment.