Ted Cruz and his colleagues had a message for Joe Biden and they kept repeating it.

In truth, they had several messages – that Biden’s immigration policy had caused lawlessness and chaos, that young children were being housed in “cages”, and that human traffickers were openly taunting border agents over the “open border”.

Yet the message repeated most often by the 18 Republican senators who visited the US-Mexico border, was the that Biden and Kamala Harris needed to come down to the Texas to see the situation for themselves.

“John and I were able to bring 18 senators down to Texas, down to the valley, to see firsthand the crisis that is unfolding here,” Cruz told the media, after his fellow Texas senator John Cornyn, and the others completed their trip on patrol boats.

“All of us today witnessed the “Biden cages”. What is occurring here on the border is heartbreaking, and it is a tragedy.”

In recent weeks, thousands of people, mostly from Central America, have beeb arriving at the US border in Texas, after Biden permitted the most vulnerable people seeking asylum to wait in the US as their cases. Previously they had been forced to wait in Mexico – something rights activists said was perilous – under rules introduced by Donald Trump.

Cruz and his colleagues, among them Lindsey Graham, Mike Lee and Tom Cotton, but not Mitch McConnell, demanded Biden ought to immediately revert to Trump’s policy.

“We just went past a dead body in the Rio Grande,” he said. “That is not humane.” 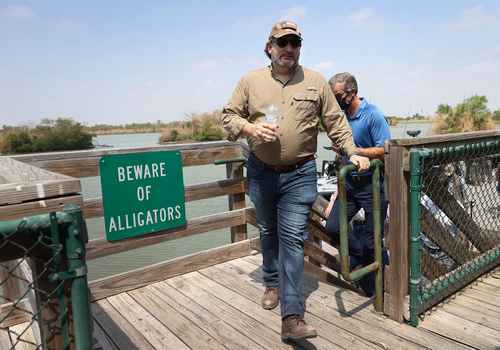 Cruz was dressed like a duck hunter, but much of he said was true. There has ben an increase in arrivals at the border, here in the Rio Grande Valley, thousands of children are being held in cramped conditions, perhaps as much as 700 per cent over capacity. It was also true that Biden has denied media access to the “tent city”.

Yet for all of that one could not shake off the sense, that it all felt like something of stunt. Did Cruz really need to livestream his visit to the river bank the night before at midnight, whispering as though he was a naturalist.

Did he and his colleagues need to set off from Anzalduas Park in Mission, on four Texas Highway Patrol power boats, bristling with machine guns, and armed officers. Or was it just to provide some exciting television footage to ensure the media showed up, to listen to the senators, overwhelmingly white, and overwhelming male.

On twitter, as the senators had set off on the river, one woman posted that she had recently been birdwatching at the same location,

“They like to pretend the Rio Grande is dangerous so they can get all gussied up in their fancy camo gear & ride in boats with guns,” said Annie Hartnett, a writer.

“Here’s me and some friends birdwatching on the Rio last weekend. It’s not dangerous. There is no crisis. Great birdwatching, though!”

If there was a lack of diversity among the delegation, the same went for what each of them had to say.

Tom Cotton, of Arkansas, said migrants were running towards border patrol agents not away from them. “They know they can  game our asylum system. They can be released into the country in a matter of days, sometimes a matter of hours,” he said. “And they will never have to go back to their home country.”

For all their tough talk, Republicans do not have a great record on passing any sort of compressive immigration. Indeed, the last major piece of legislation was the Immigration Reform and Control Act of 1986, signed into law by Ronald Reagan. It was designed to tighten security, and provide legal status to three million undocumented people in the country, but did not staunch the flow of people in the years that followed.

Given Republicans had such a poor record, given the US was proud of being a nation of immigrants and given people from Central America still wanted to come to the US, The Independent asked Cruz what his long-term solution would be.

He responded by saying he did not accept the premise of the question but continued: “We are a nation of immigrants – that is absolutely right. My father came to America from Cuba in 1957. He was 18 and he couldn’t speak English, he had $100 in his underwear. We’re a nation that is built by people coming here seeking freedom, and there’s no nation on earth that is more generous more welcoming to immigrants.”

At that point Lindsey Graham, from South Carolina, approached the microphone and said the question should be addressed to the border patrol officers, rather than politicians.

“Why don’t you do your job as reporter,” he said, with a little zing in his voice. “And ask the professionals, what the hell has happened in the last couple of months and they will tell you.”

Those working with migrants say the numbers of migrants arriving at the border has gone up and down several times in recent years, often as a result of political events in the US.

Sister Norma Pimentel, Executive Director of Catholic Charities of the Rio Grande Valley – not on the boat trip – said there had been a jump when Trump vowed to build the border wall.

From the senators there were a few words about working for immigration reform, but only once “security” been restored. Thom Tillis of North Carolina, claimed the GOP was ready to discuss reform and he had even spoken to Democrats on the issue, but said “you can not have a credible immigration reform proposal in Congress, until you fix this crisis down here”.

There was even less talk – no wonder given the limited number of questions permitted – why Republicans had sat silently by as Trump’s own immigration policy involved the splitting up thousands of migrant families once they reached the border,  part of a “zero tolerance” approach adopted in 2018.

Even Trump’s wife, Melania, spoke out against it, and said “we need to be a country that follows all laws”, but also “that governs with heart”.

If Cruz’s visit to the border shines more light on what is happening to children and families trying to enter the US – overcrowding, slow processing, sleeping on the floor – then it might do some good.

Yet Cruz admitted himself, he wants those children, from places such as Honduras, El Salvador and Guatemala, sent to Mexico to be processed. Does he think they will they really be treated better there?

As a result, some watching the senator’s boat trip on Friday, might wonder whether it was less about those youngsters, than it was about finding a way to attack Biden, and securing headlines for somebody who themselves wants to be president. 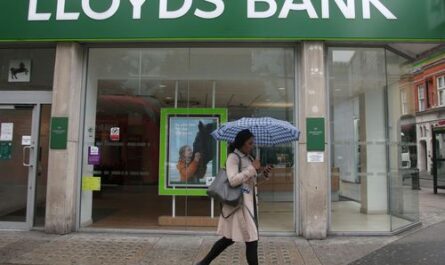