A 911 call from a group of 80 migrants stuck in a tanker truck and running low on air has sparked a race against time for Texas authorities hoping to save them.

“We can’t see anything. We’re inside a tank truck. God, we have no oxygen,” a man speaking Spanish told a 911 operator on Monday.

Another man in the background of the call can be heard pleading “Help! Blessed God!” and others can be heard screaming for help in Spanish.

The voices warned that they were running out of air.

Texas authorities and Immigrations and Customs Enforcement are now searching for the vehicle in and around the San Antonio area and have called for the public’s help locating the tanker.

An ICE official confirmed to NBC News that the agency was investigating the incident as a “possible human smuggling event.”

Despite ICE’s involvement in the search, the Bexar County Sheriff, Javier Salazar, promised the public he was not interested in arresting the migrants, just in saving them.

“I’m only interested in knowing if these people are okay. I’m not interested in arresting the people who were inside the truck,” he told Telemundo. 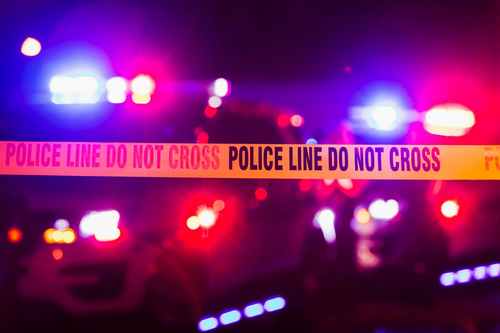 “That is the kind of thing as a first responder you lose sleep over,” Mr Salazar told the Associated Press. “You are just wondering ‘are there people that were dumped in our county and just waiting to be found?’”

The San Antonio police are also involved in the search, but have not commented on the investigation. They are forwarding their information to the Department of Homeland Security and ICE.

Though authorities still have not located the truck, Mr Salazar does have a possible lead.

NBC News and Telemundo were the first to report the story.

The sheriff located surveillance footage that captured a tractor-trailer matching the caller’s description. The vehicle was riding along with a black pickup truck.

In the video, both trucks stop near the side of the road around midnight, and an individual can be seen walking between the vehicles.

Mr Salazar is confident that the incident is a human trafficking event. He said traffickers “herd these people like cattle.”

“The only difference is in this instance, we were able to get a glimpse because this gentleman was able to place a call,” Mr Salazar said.