Held amid the Arkhangelsk region’s harsh Nordic landscapes, the annual Arctic Open is one of Russia’s least glamorous film festivals. It is also one of the few cinema events in the world dedicated to the unique culture of the Arctic peoples and intended to foster closer cooperation within the region’s artistic community.

This year, the Arctic Open was held Dec. 3-6 despite the coronavirus restrictions. Movie theaters in Arkhangelsk and Severodvinsk hosted screenings with social distancing measures in place and international guests video-conferenced in. The organizers even set up an outdoor cinema that showed short films for anyone willing to watch movies at minus 5 degrees Celsius.

In a spirit of comradery fostered by the pandemic, the festival offered a non-competitive program, although it still showed a diverse lineup of 25 full-length films, including movie premieres from Russia, Denmark, Canada and Sweden.

The films at this year’s festival explore the human quest for alternate realities and connections made by seemingly incompatible people, giving viewers the sense of exploration and adventure sorely missed in lockdowns and self-isolation. Luckily, several Russian films presented at the festival are already available online and can be enjoyed from the comfort of your couch. Here are our four top picks. 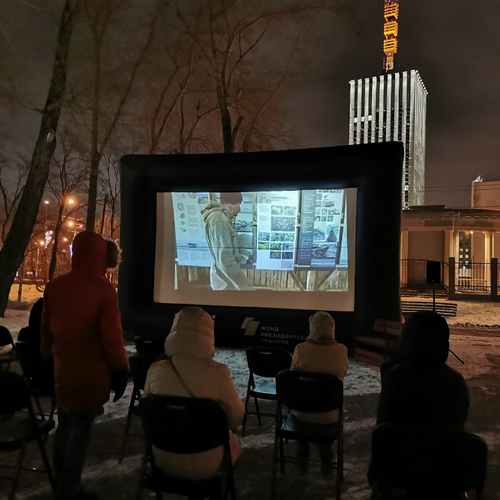 This atmospheric documentary by the creators of #eshenepozner, one of the most successful talk shows on Russian YouTube, captures journalist Nikolai Solodnikov’s visit to his grandmother’s house in the deep Russian countryside. Solodnikov’s confession of love to the woman who raised him is a deeply personal take on the life of an ordinary Russian woman and intergenerational relations. The footage, in the creators’ words, is made of moments of “emotional and sensual truth.”

The hour-long film is available for free on the show’s YouTube channel.

Due to the pandemic and its restrictions on theater performances, filmed theater performances have evolved into a new digital art form. Based on Ivan Vyrypaev’s original play, “UFO” is a collection of stories told by people from different countries but united by the same experience — an alleged alien contact. The on-stage version was first presented in Moscow’s Meyerhold Center in September, and the digital version premiered at the Kinotavr Film Festival in Sochi.

The film is available online on Okko Theater.

“Don’t Let the Sun Go Down On Me,” directed by Lubov Borisova.

Despite the title, Lubov Borisova’s film has little to do with the life of Elton John. The Yakutian dramedy tells the story of a young man named Altan who travels to a deserted island in Russia’s Far North in search of solitude. Instead he finds himself in the company of a lonely old man named Baybal. Baybal came to the island searching for his death, but Altan gives him a new reason to live when he launches a video blog to help Baybal find his long-lost daughter.

The film is available online on Okko media service.

“You’re From The Future” — a reality-grounded Russian version of “Black Mirror” — is a collection of five short films by Russia’s up-and-coming directors. The films explore real inventions made in Russia and how they will alter our lives in the near future.

The project was sponsored by Russia’s state-run Internet Development Institute and is available for free on VK social media platform.