With less than one month before State Duma elections, the authorities are subjecting Russia’s few remaining independent media outlets to successive waves of repression, labeling some as foreign agents and others as undesirable organizations.

To make matters worse, there seems to be no logic as to why or when an outlet is labeled a foreign agent. Even before the current crackdown, and especially during the last 5-10 years, the number of independent outlets was already dwindling, with the exception of a small, flourishing niche of online projects — particularly those dealing with investigations. On the other hand, the authorities now seem to be playing “eenie-meenie-miney-mo” as they decide whom to target next.

For example, few expected that the Dozhd TV channel would be included on the list of foreign agents. Although Dozhd has a very liberal editorial policy and provided complete coverage of opposition leader Alexei Navalny’s supporters this year, it has never been radical in its approach. It gives airtime to opposition politicians as well as to deputies from the ruling party, government officials and even hardcore Kremlin propagandists. In fact, Dozhd has been a sort of standard-bearer of moderate Russian journalism.

The fact that the authorities “came for” Dozhd once again upset the rules of the game — or more precisely, served as a reminder that there are no rules, and that everyone can fall victim, and probably will eventually. And even if they didn’t come for you today, you should definitely fear that they might tomorrow — even if you thought you were safe because you attend official receptions and rub elbows with influential Kremlin insiders.

Of course, the moment Dozhd was unexpectedly labeled a foreign agent, the burning question became: Who’s next? 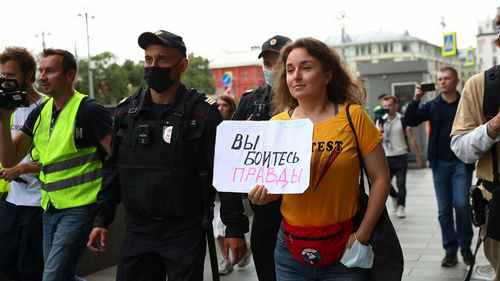 It’s an interesting question. The names of at least a dozen different national and regional media outlets come to mind, as well as popular bloggers — especially those on YouTube. You could even name a number of famous people who might wind up on the list. Although only time will tell who was right and who was wrong with their guesses, it is definitely interesting to discuss. What’s more, such speculation relieves a bit of anxiety and distracts us from the increasingly unpleasant reality.

But I would like to direct your attention to the phenomenon of the question itself.

About once a week in Russia, a repressive monster points its finger at whomever it has decided to eat. And the only thing Russian society discusses is who the monster might eat next.

True, people sometimes mention the need to leave Russia, but with decreasing frequency because most of those who wanted to leave have already gone, and those who still plan to go, prefer not to talk about it. They just leave.

In fact, we discuss whom this monster will swallow up next as though repression were a given, like bad weather or fate.

Maybe this is what is referred to as “learned helplessness.”

During Stalin’s reign, people probably whispered in their kitchens in the same way about who would be taken away next. Some might think it’s a good thing we have social networks and not just kitchens, but as it turns out, social networks don’t protect us much from repression. And it doesn’t even seem awkward or farfetched anymore to draw parallels with the Stalinist terror of the 1930s. After all, with whom and with what else can we compare victims discussing who will be next? Trump attacks faith of Catholic Biden: He is against the bible