The explosion was so huge, Emad Abour thought a nuclear bomb had dropped near the hospital where he works in Beirut. The ground rolled like an earthquake. Windows peeled from their metal frames and shattered. Heavy ward doors were lifted from their hinges and thrown across the floor.

The blast wave raged through the city to the mountains, bringing people to their knees. It struck with the force of a 3.5-magnitude earthquake, according to Germany’s geosciences centre GFZ, and was felt 290 km (180 miles) across the Mediterranean in Cyprus.

At St George Hospital, around a kilometre from the epicentre of the explosion at Beirut port, Abour’s ears were still ringing, as he crawled to the intensive care unit to check on patients.

At least 70 people were killed and 3,000 injured by the explosion which rocked the Lebanese capital, flattening much of the port and sending a towering mushroom cloud of grey and red coloured ash into the sky.

“It was the worst thing I have ever seen,” the 21-year-old said, still shaking with blood smeared down his face from pulling the wounded out from rubble and pulling them to safety. 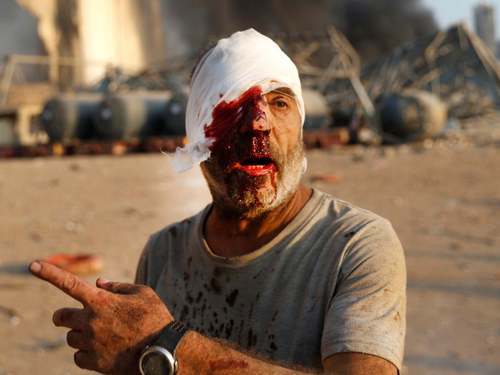 “Some critical cases were pinned under shattered windows and heavy ward doors that had been blown clean out of their frames. I moved those not plugged into ventilators as best as I could. But I saw people bleed to death, their intravenous drips pulled out, some died without oxygen.”

The hospital’s emergency department was destroyed and the power cut from the blast wave. Doctors set up makeshift wards outside in the car park which, which prior to the blast had served as one of the local drive-through coronavirus testing facilities.

There they battled to treat a stream of injured citizens on trolleys in the open air, while others tried to pull the patients and medics from the rubble of the hospital itself. Stunned family members gathered outside while staff shouted, “We don’t have any electricity – how we can treat people; we have no power?”

“It’s a disaster, a complete disaster, we are trying as best we can,” the nurse said, in tears, as an injured person screamed in pain in the background.

The exact cause of the blast – which set fire to swathes of the port area, overturned cars and brought down buildings – was not immediately known. The Independent’s correspondent, whose own flat was ripped apart with windows and doors taken off their hinges, watched as stunned residents picked their way through the destroyed neighbourhoods carpeted in shattered glass.

Lebanese prime minister Hassan Diab said there had been “dangerous” explosion at a warehouse in the port while interior minister Mohammed Fahmi told a local TV station that it appeared the blast was caused by the detonation of more than 2,700 tons of ammonium nitrate that had been stored in a warehouse at the dock ever since it was confiscated from a cargo ship in 2014.

Lebanese president Michel Aoun said later on Twitter that it was “unacceptable” that 2,750 tonnes of ammonium nitrate had been stored in a warehouse for six years without safety measures and vowed that those responsible would face the “harshest punishments”.

Video footage taken near the scene showed an initial fire and smaller blast engulfing the port before it appeared to catch a nearby building, triggering a second explosion that sent a shockwave through central Beirut, tearing up streets and neighbourhoods for several kilometres. Initial reports in Lebanese media said the first fire had been caused by a fireworks warehouse catching alight.

Charbel Haj, who works at the port, said the blast started as small explosions like firecrackers. Then, he said, he was thrown off his feet by the huge blast.

Building facades were shredded, balconies ripped off and windows shattered. Stunned residents picked their way through the destroyed neighbourhoods, while motorcyclists delivered the injured to hospital, their heads dripping in blood.

Those who felt the blast said they thought a new war had begun.

“The pressure of the blast hit my chest, it felt like an atomic bomb had gone off. The windows were blown out, the entire street is destroyed – all the roads are covered in shattered glass,” said one woman, 56, who had been a nurse through Lebanon’s 15-year civil war and the conflict with Israel in 2006.

“We fell to the ground, my son cried out, ‘The war has started again.’”

Nashaat, 25, who works as a trainee medic in a hospital in Geitawi district of Beirut, said he helped pull the corpse of his friend, a 27-year-old staff nurse, from the rubble.

Smoke rises from a port facility after large explosions on August 4, 2020 in Beirut, Lebanon (Getty Images)

“Blood was soaking everything, I don’t know what happened,” he said. “We are one of three hospitals which are now closed like this. I don’t know how Lebanon will survive.”

Behind him a medical administrator shouted, “Stand aside for coronavirus cases,” as they tried desperately to separate those evacuated from the hospital who were being treated for Covid-19 from those injured in the blast.

Lebanon had already been limping through an unprecedented financial crisis which sparked a revolution last October before the pandemic reached its shores in March, adding to the country’s woes.

The rapidly depreciating Lebanese currency has lost 80 per cent of its value since the start of year, triggering near hyperinflation as food costs have more than doubled in price. This crippling lack of fuel has meant citizens had been grappling with 20-hour power cuts a day.

The explosion, the soaring number of casualties and the destruction can only add to this pressure.

Firass Abiad, chief of Rafic Hariri University Hospital, which is the main coronavirus medical facility, had already tweeted on Wednesday morning that it had been nearing capacity. At least 5,000 people were confirmed as infected, while 65 had died from the virus.

Amid the unprecedented health and financial crisis, hospitals were left ill-equipped to deal with Wednesday’s explosion.

A security source said victims were being taken for treatment outside the city because Beirut hospitals had already been packed with wounded. Red Cross ambulances from the north and south of the country and the Bekaa Valley to the east were called in to cope with the huge casualty toll.

Hotel Dieu de France Hospital, just a few kilometres from the epicentre of the blast, said it was forced to turn injured away, as it was at full capacity.

“We have at least 12 dead that I have seen, most are form internal bleeding or head injuries,” said Emad, 31, a doctor within the ER unit.

“We have no more space here, there are too many injured. We have no idea how the healthcare system will cope.”

Donald Trump said he sent his sympathies to Lebanon for the dozens of people killed and thousands wounded in a massive explosion, which he cast as an attack, and offered US help.

“The United States stands ready to assist Lebanon,” Mr Trump said at a White House briefing. “We will be there to help. It looks like a terrible attack.”

Boris Johnson confirmed British nationals had been among those caught up in the aftermath of the blast. The UK government also said it was “ready to provide support in any way we can”, and foreign secretary Dominic Raab said the UK stood in solidarity with Lebanon.

Beirut’s governor, Marwan Abboud, broke into tears as he toured the site, exclaiming, “Beirut is a devastated city.” Prime minister Hassan Diab vowed that “those responsible will pay”.

But back at the hospitals, the wounded sat with their head in their hands. “We just can’t take any more, it isn’t possible,” said one woman, who had been treated for a minor head injury.

“We have no money, no food, no electricity, now our houses are destroyed, and family members are missing. It feels like the end of the world.”