Temperatures reached as low 0F (-18C) in some parts of the state on Sunday night, causing widespread disruption to power supplies, transport and sea turtles that were stunned by the cold.

As cold-blooded animals, sea turtles are unable to swim in cold water, and become lethargic — so wash-up on the shore.

By Tuesday, rescuers and volunteers had collected more than 2,500 sea turtles on South Padre Island in southern Texas, on the Gulf of Mexico, a sea turtle sanctuary said.

Both the public and the sanctuary have been rescuing hundreds at a time, and shared images to social media, since the winter storm struck Texas last weekend, with cold temperatures are set to continue. 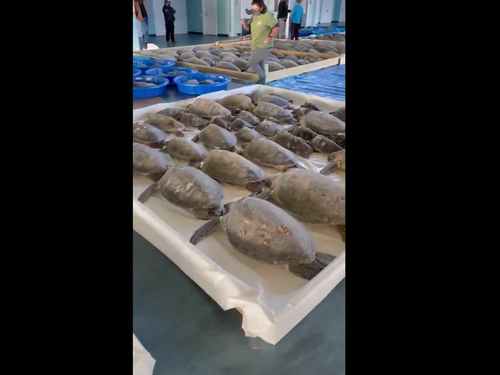 Another, who runs a boat company on South Padre Island, told KRGv-TV that he pulled almost 200 turtles from the sea on Sunday and Monday alone.

The sanctuary, Sea Turtle Inc, said on Facebook on Tuesday they had “well surpassed 2,500 turtles” and thanked members of the public for helping with the turtle rescue, after warning on Monday they had reached “maximum capacity”.

The sanctuary asked for donations and help with providing power generators, to regulate tanks to hold the rescued sea turtles, after three days without power — caused by the storm, and amid wider power outages across Texas.

“This is the biggest sea turtle cold stunned event in south Texas and we are overly grateful for the support,” said Sea Turtle Inc, which has raised more than $30,000 (£21,639) to help the rescue effort.

“Tomorrow the temperature will fall even lower and hundreds of more turtles are in danger,” they wrote on Tuesday. “We beg our community to keep watch for turtles and report any floating or washed ashore in your area”.

“If you are not able to physically volunteer to look for turtles please consider helping us offset the tremendous cost of treating these patients by donating to Sea Turtle Inc.” The world’s billionaires added $5 trillion to their wealth during the pandemic, the biggest surge in decades