Tiger Woods will not face any charges over his devastating car crash after police said the golfer was not on any drugs or alcohol when his SUV careered off a California road.

Authorities say that Woods, who is recovering from surgery to his badly injured legs, was not under the influence of any substance, despite not performing blood or alcohol tests on him after the accident.

“There was no evidence of any impairment whatsoever,” said Los Angeles County Sheriff Alex Villanueva on Facebook on Wednesday.

“He was lucid, no odour of alcohol, no evidence of any medication, narcotics or anything like that. That was not a concern so no field sobriety test and no drug expert needed to respond. This is what it is, an accident.”

Mr Villanueva was asked during the online Q&A if Woods would face any criminal charges stemming from the single-vehicle crash in Rancho Palos Verdes, outside of Los Angeles.

“No. A reckless driving charge has a lot of elements to it. This was purely an accident,” he said. 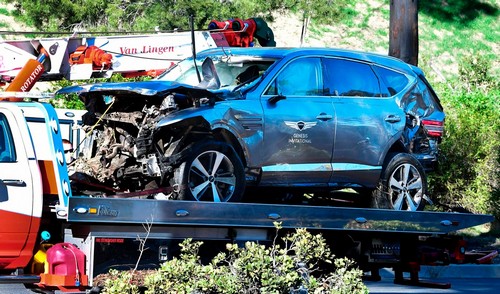 And he added: “We don’t contemplate any charges whatsoever in this crash. This remains an accident. An accident is not a crime. They do happen, unfortunately.”

The 15-time major champion crashed a loaned $50,000 Genesis GV80 SUV while driving downhill on a steep and winding stretch of road shortly after 7am on Tuesday.

Police said after the crash that the location of the accident was known to be a dangerous spot as drivers often accelerated prematurely despite going downhill.

Woods had been on his way from the luxury oceanfront Terranea Resort to Rolling Hills Country Club to film a TV teaching lesson with two NFL quarterbacks.

A neighbour who heard the crash called 911 at 7.12am and the first police on the scene six minutes later found Woods in the driver’s seat with his seatbelt fastened.

Police say that the golfer was “lucid and calm” but unaware of the extent of his injuries.

Los Angeles County firefighters used a pry tool and an axe to help remove Woods through the SUV’s windscreen and he was taken to Harbor-UCLA Medical Center with significant injuries.

Police said at a press conference after the crash that Woods was “fortunate to be alive” as his car crossed the median, hit a curb and rolled several times before coming to rest in brush.

Deputy Sheriff Carlos Gonzalez was first on the scene to help Woods.

“I don’t think he was aware of how gravely he was injured at the time. It could be a mixture of adrenaline, it could’ve been shock,” he told NBC’s Today show on Wednesday.

Woods, 45, completed “a long surgical procedure on his lower right leg and ankle” at the Harbor-UCLA Medical Center on Tuesday and was described by his team as being “awake, responsive and recovering in his hospital room.”

“Comminuted open fractures affecting both the upper and lower portions of the tibia and fibula bones were stabilised by inserting a rod into the tibia.

“Additional injuries to the bones of the foot and ankle were stabilised with a combination of screws and pins.

“Trauma to the muscle and soft tissue of the leg required surgical release of the covering of the muscles to relieve pressure due to swelling.”

The golfer’s girlfriend Erica Herman and agent Mark Steinberg are reportedly at the hospital with him as he recovers.

Woods had spent the weekend in Southern California as he was host at the 2021 Genesis Invitational, which is sponsored by his foundation.

On Monday he had filmed teaching lessons with former NBA player Dwyane Wade and comedian David Spade for a Golf Digest TV show and had been due to shoot with NFL quarterbacks Drew Brees and Justin Herbert on Tuesday.

He had told Jim Nantz on CBS that he hoped to play in The Masters in April if he got the clearance from doctors over his injured back.

Now it is unknown if Woods will require future surgery for his leg injuries.

This is the third police investigation involving Florida-based Mr Woods and his driving.

In 2009 his SUV ran over a fire hydrant and hit a tree at Thanksgiving, which resulted in the revelation that he had cheated on wife Elin Nordegren with a string of women.

After the incident Woods lost many of his lucrative corporate sponsorship deals, went to rehab in Mississippi and did not play golf for five months.

In May 2017, police in Florida found Woods asleep behind the wheel of his car on the side fo a road.

He was arrested for DUI and later said he had suffered a reaction to prescription pain medication he was taking for back pain.

Woods later pleaded guilty to reckless driving and received treatment for his use of prescription medication and a sleep disorder.