Donald Trump has been accused of being stuck in a “convention bubble” after Republicans all but ignored the protests in Wisconsin following the shooting by police of an unarmed American man.

The city of Kenosha, located 40 miles south of Milwaukee, has reeled after three nights of violence and damage, that followed peaceful protests after the shooting on Sunday evening of Jacob Blake, a 29-year-old father-of-three.

Mr Blake remains in a stable condition in hospital though his family has said he is paralysed and may never walk again.

On Wednesday, investigators in Kenosha named the police officer who shot him as Rusten Sheskey, who has been on the force for seven years.

Yet, even as hundreds of federal law enforcement officers were dispatched to Wisconsin to help support police and the national guard, the shooting of Mr Blake and the protests they triggered have received little mention at the convention. 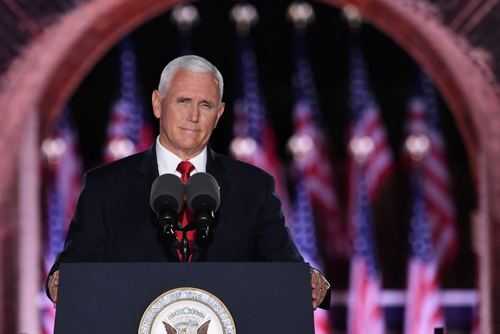 Borger said it was unclear who was “the real Donald Trump”.

“Or is it the Donald Trump, who just wants to call out the national guard and condemn what he calls chaos.”

On Wednesday evening, in his address vice president Mike Pence called for an end to violence in various cities in the nation, and said Americans should not fight each other.

He also claimed that America’s law enforcement forces could operate alongside the African American community without any problems. He doubled down on a vow not to defund or reform police forces in the US.

“We don’t have to choose between supporting law enforcement and standing with our African American neighbours to improve the quality of their lives, education jobs and safety,” he said.

“And from the first days of this administration, we’ve done both, and we will keep supporting law enforcement and keep supporting our African American and minority communities across this land for for four years.”