A paper published today in The Lancet finds that over the last four years, the Trump administration’s policies have had a “devastating impact” on “every aspect of health” in the US – and that this impact goes well beyond the staggering Covid-19 death toll.

In their new report, the researchers of the Lancet Commission on Public Policy and Health in the Trump Era write that 461,000 fewer Americans would have died in 2018 alone and the Covid-19 death toll would have been cut by 40 per cent if the US’s average life expectancy were aligned with that of other G7 nations.

However, the commission members also find that these figures reflect not just four years of dangerous policy, but also decades and more of systemic problems that leave some groups in the US particularly vulnerable to poor health.

The commission’s diagnosis of the Trump years is extremely damning. Noting that some of the president’s largest winning margins in 2016 came in counties with the nation’s worst economic and mortality trends, the report finds that the president first exploited many non-wealthy white people’s anger over their deteriorating life chances and then enacted policies that benefited the wealthy – or as the authors call them, “an emboldened plutocracy”.

Among the policies they point to are the Trump administration’s massive tax cuts, which “opened a budget hole that served as justification for cuts to food and housing subsidies that prevent malnutrition and homelessness for millions of people”. They also point to a 2.3 million surge in the number of uninsured people during Mr Trump’s presidency, as well as environmental policies already exposing many Americans to levels of harmful pollution unseen in decades. 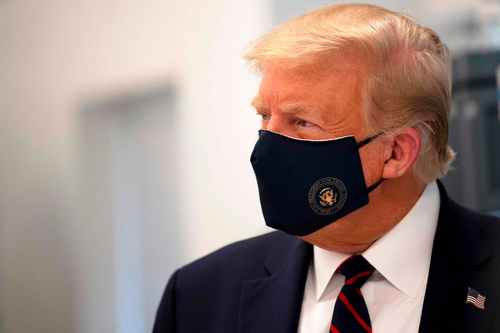 However, while the commission was formed in 2017 to specifically study the health effects of the administration’s policies, its report goes beyond the impact of specific policy choices and points to deeper problems. Crucially, it argues that simply rolling back the harmful policies of the last four years will not be enough to change the patterns of excess deaths they have identified.

At the root of the issue, the commission says, are the effects of nearly a half-century’s neoliberal policies, including lopsided tax breaks, deregulation and spending reductions that have benefited the rich while vastly exacerbating income and health inequalities.

Also in the frame is systemic racism, whose health effects were visible long before the pandemic hit. Covid-19’s hugely disproportionate and deadly impact on people of colour, the authors write, “has reinforced longstanding health inequities driven by racially patterned disparities in housing, wealth, employment, and social and political rights”.

According to commission co-chair Dr Steffie Woolhandler, one of the commission’s most alarming findings is that the overall health of the US population is no longer tied to the state of the economy.

“Americans’ health was deteriorating even as our economy was booming,” she said. “This unprecedented decoupling of health from national wealth signals that our society is sick. While the wealthy have thrived, most Americans have lost ground, both economically and medically.

“The Biden administration must reboot democracy and implement the progressive social and health policies needed to put the country on the road to better health.”

Among the policies recommended by the commission is single-payer, Medicare for All-style reform of the healthcare system – something that Joe Biden stopped short of backing during his campaign, instead promising to “protect and build on Obamacare” by lowering costs and making the system easier to navigate.

Other recommendations from the commission include reversing Trump-era tax cuts on the wealthy and corporations, implementing the Green New Deal, and enforcing voting and civil rights – all measures designed to put the US on “the path away from Trump’s politics of anger and despair” while addressing the fundamental social and economic problems that injure so many Americans.

Calling on the Biden administration to pursue “structural solutions, including reparations” to “ensure everyone has the right to health to reconfigure fundamental aspects of the US’s economy and society”, commission member and Harvard scholar Dr Mary T Bassett argued that the Covid-19 experience should be an urgent wake-up call.

“The disastrous, bungled response to the pandemic made clear how existing, longstanding racial inequities simply have not been addressed,” she said. “It’s time to stop saying these preventable gaps cannot be eliminated.”