Donald Trump says he would agree to Democrats’ calls for new funding for the United States Postal Service to deal with mass mail-in ballots if they agree to more of his demands in stalled talks about a fifth coronavirus relief bill.

As part of his recent pushback on some states’ intention to send ballots to all registered voters amid fears about voting in person during the coronavirus outbreak, the president has expressed skepticism that the post office will be able to collect so many ballots and get them where they need to go before Election Day.

All week, he said he would not agree to Democrats’ demands for $25bn in extra USPS funding be included in a possible fifth Covid-19 recovery bill because mail-in voting automatically leads to voter fraud. (Experts in a number of studies, however, say the opposite.)

After first during a Thursday television interview appearing to reject the Democrats’ proposal, he later signalled a willingness to consider it. He went even further on Friday during an afternoon press briefing before he departed for a weekend at his Bedminster golf resort in New Jersey.

“Sure, if they give us what we want,” Mr Trump replied when asked if he would sign a recovery bill that includes the extra USPS monies. 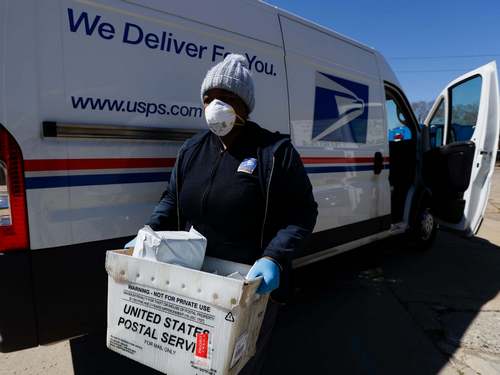 That marked the first time the president and his team have given on a major Democratic demand during the stall negotiations. But it would come with a price, he said.

Specifically, the president said he would require in exchange $105bn for states to help them reopen schools, something about which Democrats are skeptical of doing. He also would ask Democrats to include funds for state and local governments to “save” police officers, firefighters and teachers.

“Democrats are holding this up,” he said each time he read off one of his demands from notes on his lectern.

But top Democrats say it is the Trump administration standing in the way of a deal.

Speaker Nancy Pelosi grew animated on Thursday when told that Treasury Secretary Steven Mnuchin, one of Mr Trump’s lead negotiators, said Democrats are not interested in having serious talks.

“No, you know what I think something was wrong with his statement because Chuck Schumer and I said … that we could meet in the middle,” referring to the Senate minority leader and a possible $2trn size of a bill that would average the two sides’ preferences. “When they are ready to do that we will sit down. But we are not inching away from their meager, piecemeal proposal of the idea that the press says, “Why can’t you come to an agreement?'”

“Because,” she said loudly, “we are miles apart in our values.”