The Trump campaign has attacked Bill Clinton for “lecturing” people on how to behave in the White House, amid claims he abused his position by conducting an extra-marital affair in the Oval Office.

Amid a fresh examination of the former president’s treatment of women as a result of the #MeToo movement, and claims – adamantly denied by Mr Clinton – that the late Jeffrey Epstein procured young woman and girls for him on his Caribbean island, the Trump campaign landed a punch shortly after he spoke at the Democratic National Convention.

“At a time like this, the Oval Office should be a command centre. Instead, it’s a storm centre. There’s only chaos. Just one thing never changes-his determination to deny responsibility and shift the blame. The buck never stops there,” said Mr Clinton.

“Now you have to decide whether to renew his contract or hire someone else. If you want a president who defines the job as spending hours a day watching TV and zapping people on social media, he’s your man.”

The Trump campaign was quick to fire back.

“With a straight face, Bill Clinton just tried to tell us ‘how’ the Oval Office should be used,” tweeted campaign spokesperson Hogan Gidley. 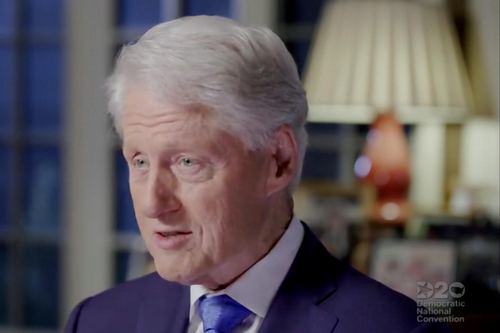 “The absolute LAST person in the known universe I’d listen to about ‘how’ the Oval Office should be used… is Bill Clinton.”

In addition to securing seats for the women, Mr Trump attended a press conference with them, where they repeated accusations about Mr Clinton. Mr Trump, who has himself been accused by numerous women of sexual abuse, made no comments.

Since then, the reputation of Mr Clinton, who was impeached for lying under oath about a sexual relationship with a 22-year-old intern Monica Lewinsky, some of it conducted in the Oval Office, has only deteriorated, partly because of the #MeToo movement which asked fresh questions about the concept of consent and the way people in powerful positions, usually men, abuse those positions.

The 42nd president has also had to fend off questions about the nature of his relationship with the late convicted paedophile, Jeffrey Epstein, who was arrested and charged with trafficking dozens of young women and girls, victims who were then allegedly abused by Epstein’s rich and powerful friends.

Among other high profile figures accused of having sex with young women and girls trafficked by Epstein, are celebrity lawyer Alan Dershowitz and Prince Andrew. Like Bill Clinton, they have all denied the claims and none have been charged. Epstein killed himself a year ago as he awaited trial on sex trafficking charges, to which he had pleaded not guilty.

Mr Clinton’s most recent denial came in May after Netflix released Jeffrey Epstein: Filthy Rich, a four-part documentary series, that included an interview with a longtime tech worker on the Caribbean island who claimed he once saw the former president at Epstein’s villa.

There was no one else with the pair, the worker Steve Scully, 70, said about the incident.

“This was a lie the first time it was told, and it isn’t true today, no matter how many times it’s repeated,” spokesman Angel Urena told the New York Post.

Meanwhile, on Tuesday the Daily Mail published a 2002 photograph that appeared to show Mr Clinton enjoying a massage being given by 22-year-old Chauntae Davies, Epstein’s personal masseuse. She told the paper Mr Clinton did not behave inappropriately.

The pictures were apparently taken onboard Epstein’s private jet, which has become dubbed the “Lolita Express”, while on a humanitarian trip to Africa.

A spokesperson for Mr Clinton previously issued a statement that said: “President Clinton knows nothing about the terrible crimes Jeffrey Epstein pleaded guilty to in Florida some years ago, or those with which he has previously been charged in New York.”