Watching Wednesday night’s Democratic convention, Donald Trump launched a Twitter barrage against his predecessor Barack Obama, whose speech painted the president as an incompetent egocentrist who has failed to “grow into the job”.

Tweeting in furious capital letters, Mr Trump repeated an unfounded accusation he has been trading on for months now. “HE SPIED ON MY CAMPAIGN, AND GOT CAUGHT!”

He also called into question Mr Obama’s belief in his former vice president. “WHY DID HE REFUSE TO ENDORSE SLOW JOE UNTIL IT WAS ALL OVER, AND EVEN THEN WAS VERY LATE? WHY DID HE TRY TO GET HIM NOT TO RUN?”

He followed up with a video of his own press conference delivered hours before the speech, in which he blamed Barack Obama and Joe Biden for so ruining the country that he felt compelled to run for office himself.

“Probably if they did a good job I wouldn’t have even run. I would’ve been very happy, I enjoyed my previous life very much. But they did such a bad job that I stand before you as president.” 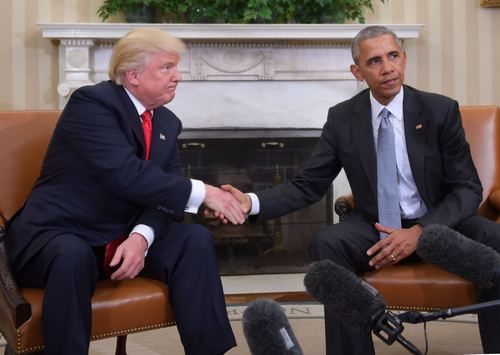 Mr Obama’s criticism of Mr Trump was directed primarily at his character and his attitude to the office of president.

“For close to four years now, he’s shown no interest in putting in the work; no interest in finding common ground; no interest in using the awesome power of his office to help anyone but himself and his friends; no interest in treating the presidency as anything but one more reality show that he can use to get the attention he craves.

“Donald Trump hasn’t grown into the job because he can’t.”

Mr Trump has repeatedly accused Mr Obama of spying on his 2016 presidential campaign, but has never produced any facts to back up his claim.

Some of his allies have picked up the theme and continue to pursue it, but have similarly failed to unearth clear evidence that the White House was involved in any such operation.

Nonetheless, Mr Trump has coined the term “Obamagate” to describe the nebulous spying allegation, calling it “the greatest crime in American political history” and promising that a full account of it will be released in due course.

Yet after months of railing against the alleged scandal, he has yet to explain exactly what he is referring to, instead periodically tweeting the word “Obamagate!” without context.