On Monday evening, as the world was reacting to a court decision to sentence Kremlin critic Alexei Navalny to two years and eight months in jail for violating the terms of a 2014 suspended sentence, Russia’s capital was being swiftly fortified and closed off.

Riot police in black balaclavas formed columns in popular tourist spots like the square in front of the Bolshoi Theatre, Red Square and the trendy Chistye Prudy district as the authorities prepared for possible unrest following Navalny’s team call for his supporters to take to the streets following the guilty verdict.

Baza — a telegram channel with close links to Russian security services — said that a total of 8,304 police from different departments were mobilized throughout Tuesday, a number far exceeding the 2,000 to 3,000 protesters local media outlets estimated to have rallied in Moscow on Monday evening.

“The Kremlin may have genuinely feared a more massive protest but I think it was definitely trying to make a point,” Galeotti told The Moscow Times.

“The intent was political, to make it clear that the government has what in military terms is called ‘escalation dominance’: the will and capacity to escalate to match and exceed anything the protesters can do. The goal is to make people think resistance is futile.” 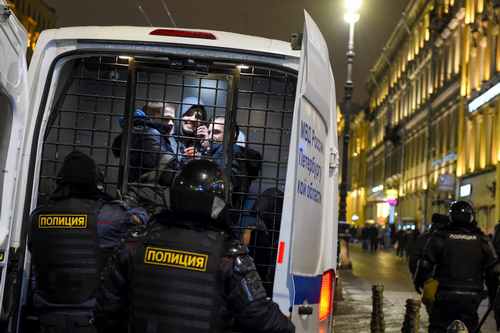 Despite the heavy police presence, freezing temperatures and closure of roads and metro stops, clutches of people did make it out in Moscow, where they were met by riot police willing to apply brute force to disperse the crowds.

In one video, a group of protesters cornered in a sidestreet steps from the Kremlin are seen being beaten by the riot police while chanting “We are not armed.”

Footage circulating on Twitter also showed police stopping taxis and cars that were honking in solidarity with the protesters, while authorities said they have opened an investigation into a police officer seen in a video beating a Russian journalist during the protest.

Damelya Aitkhozhina, a researcher at Human Rights Watch in Moscow disagreed with Peskov, saying the police tactics were “excessive” and “completely disproportionate” to the actions of the “peaceful” protesters.

Aitkhozhina believes that the authorities’ actions are further escalating the situation in the country.

“We are in danger of falling into a cycle of violence. Suppressing protests will only fuel more anger among the people.”

Independent monitors estimate that more than 10,000 people have been detained at recent rallies in Russia in support of Navalny, filling detention centers in Moscow to bursting point and forcing authorities to divert buses full of detainees to towns outside of the capital.

On Feb. 2, in a video message sent from a police bus, a group of protesters arrested last Sunday in Moscow said they had been held in the vehicle for hours without food, water or toilet facilities. They said they had been stuck in front of a special detention center usually used for illegal migrants in the village of Sakharova, 70 kilometers outside of Moscow.

Journalists who have been arrested and held during the protests have also been sharing their detention experiences.

In a Facebook post, Daniel Turovsky, a special correspondent for the independent Meduza outlet, said he was unable to contact his family and friends during the 24 hours he was in detention. He added that he was denied access to a lawyer and threatened by police.

Human rights groups said they have received many similar complaints, and that many people who have been detained are still unaccounted for.

As a result, family members of the detained have started to gather online in Telegram chats, where they share information and tips on how to reach detention centers, offering each other lifts to the cells and providing details on visiting hours.

“I beg you, please help me find my son Yuri Kuzin. There was news that he is in Sakharova, but I can’t find him,” one such post read.