In a Friday vote by its board of trustees, St John Fisher College decided that it will not rescind the former mayor’s honorary doctorate. The school had awarded Mr Giuliani the degree in 2015, but had recently come under pressure to withdraw it after the riot at the US Capitol.

St John said that rescinding the degree would require a two-thirds majority, but the trustees’ votes did not reach that number, and told WHAM that “no further action will be taken.”

Mr Giuliani has faced severe criticism since the 6 January Capitol attack. On that day, he was among the speakers at a pro-Trump rally who fired up the crowd with conspiracy theories that the 2020 election had been stolen.

“Let’s have a trial by combat!” Mr Giuliani shouted to the audience. 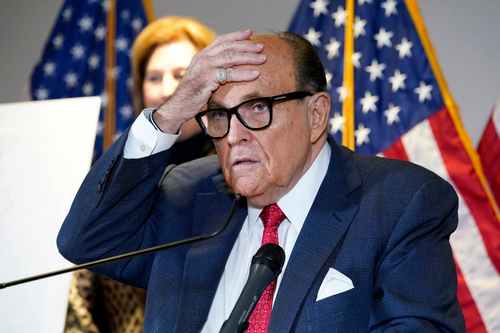 Since then, several prominent figures and organisations have condemned Mr Giuliani. Middlebury College in Vermont revoked the honorary Doctor of Laws degree it had given him. The New York State Bar Association has debated removing him from the organisation. Brad Hoylman, chairman of New York State’s Senate Judiciary Committee, requested that he be disbarred.

Meanwhile, 15 alumni of St John Fisher College wrote a letter asking their school to remove Mr Giuliani’s doctorate, calling his actions “antithetical to everything St John Fisher College espouses, such that we believe his continued relationship with the College risks permanent damage to the College’s reputation, campus culture, and the prestige of future honorary degrees.”

A petition then called for revoking the degree as well, and received 430 signatures from teachers, students, and alumni.

Mr Giuliani received the St John doctorate six years ago, when he gave a commencement speech at the college. The degree honoured the former mayor’s leadership of New York City after the September 11 terrorist attacks – the moment he was best known best for at the time.

Since then Mr Giuliani, who served for years as former president Donald Trump’s personal attorney, has become more closely associated with promoting conspiracy theories about the 2020 election and fruitlessly trying to overturn it in court.