Nikki Haley, the former US ambassador to the United Nations and a rumoured 2024 presidential hopeful, told Fox News on Monday that former president Donald Trump deserves a “break” and shouldn’t be impeached for his accused role in inciting the attack on the Capitol.

“I mean they beat him up before he got into office, they’re beating him up after he leaves office. I mean at some point, I mean give the man a break,” she told Fox’s Laura Ingraham.

Following the 6 January attack on the capitol, Ms Haley, a Republican who previously served as South Carolina’s governor, harshly condemned those involved in the riot.

“There are no excuses or defense for this moment,” Ms Haley wrote on 9 January. “There is only one way forward. Those who broke the law must be punished.”

In private, she was even more scathing, blaming the Republican party for some of the day’s events. 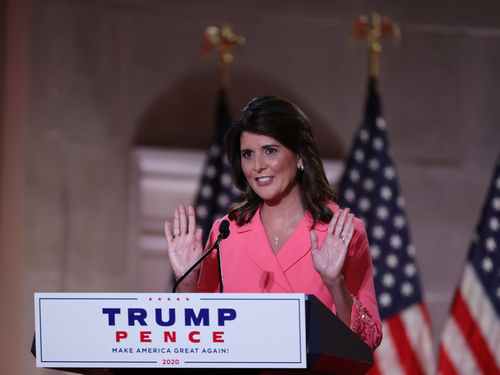 But that need for punishment and personal responsibility doesn’t apply to the president it seems.

“I don’t even think there’s a basis for impeachment,” Ms Haley added in her Fox interview.

“I mean the idea that they’re even bringing this up, they didn’t even have a hearing in the House. Now they’re going to turn around and bring about impeachment yet they say they’re for unity,” she told Fox’s Laura Ingraham.

In fact, as Ms Haley reported mulls a 2024 run and spreads the word about her recently launched political action committee, Stand for America, Ms Haley is one of the few prominent Republicans left willing to give former President Trump full-throated praise, even as former staunch allies like Mitch McConnell cut him loose after the attack.

“I’m really proud of the successes of the Trump administration,” Ms Haley recently wrote on Twitter. “Whether it was foreign policy or domestic policy, we should embrace those.”

As ambassador to the UN, Ms Haley was a frequent, passionate critic of regimes like Iran, Russia, and Venezuela for their use of political violence and other norm-breaking conduct, and she helped the US withdraw from the UN Human Rights Council in 2018, arguing the body gave cover to human rights abusers.

Ms Haley, one of the few former Trump officials to exit on good terms with the president and without major scandals, resigned that same year, and became a board member at aerospace giant Boeing in 2019 before resigning last March.

Ms Haley’s Stand for America PAC did not respond to a request for comment.

The impeachment process against former president Trump formally began on Monday, when House officials delivered to the Senate the article of impeachment charging Mr Trump with incitement of insurrection.