Navalny was charged with “discrediting the honor and dignity” of the 95-year-old veteran after describing him and others who appeared in a pro-Kremlin video as “the shame of the country,” “corrupt lackeys” and “traitors” in a June 2020 tweet. The video had been promoting a constitutional vote that handed President Vladimir Putin the ability to rule until 2036.

Moscow’s Babushkinsky District Court is not expected to hand Navalny a verdict Friday.

Navalny was sentenced Tuesday to 2 years and 8 months in a prison colony after the court found him guilty of violating his probation for a 2014 fraud conviction while recovering from a near-fatal poisoning in Germany that he blames on Putin.

The anti-corruption campaigner was detained immediately upon his Jan. 17 return to Russia, a move that sparked some of the largest nationwide protests in Russia’s recent history and a brutal crackdown on demonstrators with at least 10,000 people detained. 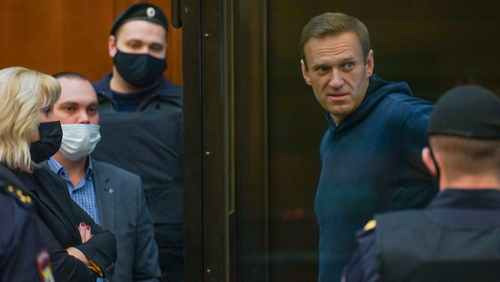 Western leaders were quick to condemn his jailing and have weighed new sanctions against Moscow in response. The EU’s top envoy Josep Borrell, meeting with his Russian counterpart Sergei Lavrov in Moscow on Friday, said that Navalny’s jailing and subsequent crackdown marked a “low point” in the bloc’s relations with Russia.

The Kremlin has dismissed criticisms from the West and said police broke up the protests over Navalny’s jailing because they were illegal.

In December, investigators also opened a criminal probe against Navalny for large-scale fraud, alleging he used more than 356 million rubles ($4.8 million) of donations to his organizations for personal purposes. That charge is punishable by up to 10 years in prison.

Navalny and his supporters believe all three cases are politically motivated attempts to silence Putin’s most vocal domestic critic.