While the list of countries approving Russia’s coronavirus vaccine keeps growing, the jab is still in need of good publicity at home as most Russians remain reluctant to vaccinate.

Luckily, the Sputnik V vaccine’s developers might have just gotten the publicity boost they’d been looking for.

Two prisoners at a corrective labor colony in the Urals city of Nizhny Tagil have written a rap song dedicated to Russia’s coronavirus jab and filmed an accompanying music video.

Inmates Alexander Zayats and Yevgeny Kudrin wrote original lyrics and music as a way to motivate more Russians to participate in the mass vaccination drive, according to the video’s description.

In the best traditions of the genre, the video, called “Goodbye, Coronavirus!”, opens with a shout-out to the label sponsoring the artists — Corrective Colony No. 12, disguised as “12 Studio Twelfth.”

“The vaccine is not a joke! Sasha, are you going to vaccinate?” Kudrin asks his co-star at the beginning of the video. 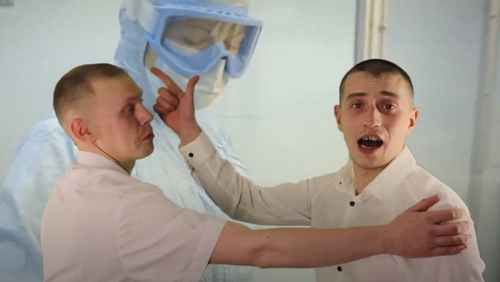 “Oh yeah!” Zayats responds with enthusiasm as his voice slides into the lyrics.

The song’s first verse recalls the deadly virus’ emergence in China before declaring that Russian scientists “have found a cure, the Sputnik V vaccine.”

“Help us, Sputnik V,” says the chorus, accompanied by an accordion beat. “Go get vaccinated with Sputnik V!”

The second verse praises the global success of the jab “envied by the West” and “approved by consumer protection watchdog Rospotrebnadzor.” The authors add that they are “eagerly waiting for the vaccine behind bars.”

“Sputnik V will rid you of Covid!” the song concludes.

“Sputnik V” is the second pandemic-themed song to be recorded at the colony. Last spring, inmates composed a song that stressed the importance of coronavirus prevention measures and asked Russians to stay home during the national self-isolation mandate.

A Russian Orthodox priest has blessed a police van on a recent visit to the Siberian republic of Buryatia, the regional Interior Ministry announced.

Russian priests have previously been seen sprinkling holy water on military hardware including ballistic missiles, submarines and space rockets as part of blessing rituals. The practice has become so widespread that a Church commission last year called for an end to blessing weapons of mass destruction.

The Buryat Interior Ministry branch said the Orthodox priest visited its drug control department “as part of an established tradition of inviting clergymen of different religions at the beginning of the year.”

“Father Nicholas consecrated the department’s offices, as well as official vehicles, with a special ‘Consecration of the Chariot’ rite,” the region’s Interior Ministry said in a statement on its website Friday. 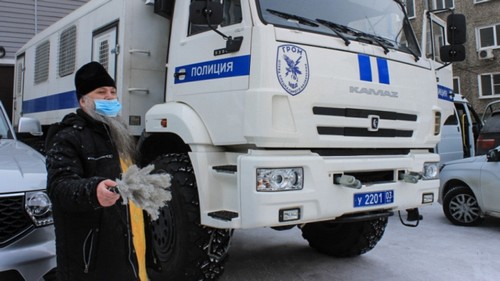 An accompanying image showed the priest holding an aspergillum, a brush used to sprinkle holy water, next to a blue-and-white police truck with security grilles in its door and windows.

“The priest also met with the head of the drug control department and wished the team strength of spirit, success in the service and good health,” the statement read.

The photo op was published weeks after the detention of some 12,000 people at mass nationwide rallies supporting jailed Kremlin critic Alexei Navalny and takes place against the backdrop of President Vladimir Putin’s close alignment with the Russian Orthodox Church. 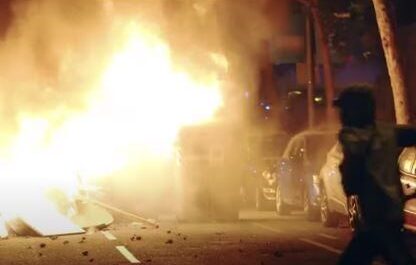 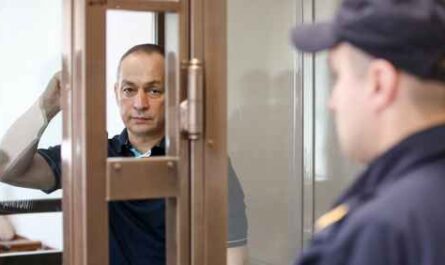