At least 28 people have died, including nine children, after a gas tanker exploded and burst into flames on a highway in Nigeria.

Bisi Kazeem, a spokesman for road safety agency the Federal Road Safety Corp (FRSC), said the accident took place opposite a petrol station along Zariagi-Lokoja highway in the African state of Kogi on Wednesday.

According to local reports, the tanker lost control and rammed into five cars, three tricycles and two motorcycles on the busy highway.

It then fell on one of the five cars carrying a family, crushing them, before bursting into flames.

The family did not survive the incident.

In a statement on Twitter, the Federal Road Safety Corps said Mr Kazeem “commiserated with the victims of the inferno” and promised to put preventative measures in place.

It said: “The Federal Road Safety Corps Marshal, Dr. Boboye Oyeyemi, received with shock the early morning crash of a tanker leading to inferno in which lives and properties were lost at Felele, a suburb of Lokoja, today 23 September.

Local reports added the Kogi State governor, Yahaya Bello, said he was “shocked and sad” over the fatal tanker explosion. 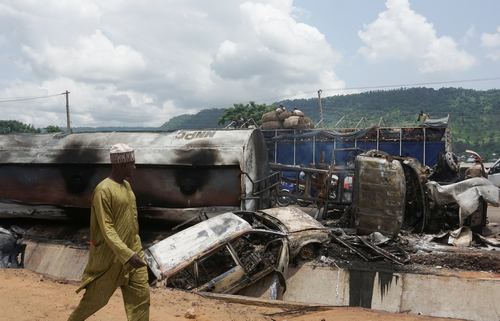 A statement issued by his chief press secretary to the governor, Onogwu Mohammed, said: “Governor Bello is very sad to learn of the tragic loss of lives, many vehicles, property and other valuables in the petrol tanker fire, while expressing his deepest condolences to the family of those affected by the ugly occurrence.

Road traffic incidents in Nigeria are said to be common due to the poor maintenance of the roads and low safety standards.

In 2018, a crash involving a tanker and two other vehicles on the Zariagi-Lokoja highway resulted in three deaths and five people injured, after the accident saw the tanker burst into flames.

What is coronavirus drug Trump claims is a ‘cure’?