A North Carolina police officer faces an investigation after disturbing video footage showed him appearing to choke a dog by the leash before slamming him into a vehicle.

In the clip obtained by Fox 46, an unidentified Salisbury Police Department officer was seen giving a command to a K9 named Zuul in a training session after the animal got out of a parked SUV.

The officer then put a leash on the animal before appearing to lift him up by the collar and then slamming him into the side of the vehicle.

“We’re good, no witnesses,” an onlooker is heard saying as the officer drags the dog back into the SUV.

The officer was then heard yelling “stay” to the dog before apparently hitting the animal, the video shows.

Someone then asks on the video, “Is your camera on?” The footage was sent anonymously to Fox 46, the publication reported.

Salisbury Police Chief Jerry Stokes told reporters during a news conference on Tuesday that the department has since launched an investigation into the incident following the release of the video.

“SPD’s review of and response to this matter is and will continue to be thorough and fair so as to provide due process to everyone involved,” he said in a statement. “SPD can confirm that, as a matter of course, the officer has been administratively separated from the canine while SPD conducts its review. The canine was not harmed and is healthy and is well-cared-for.” 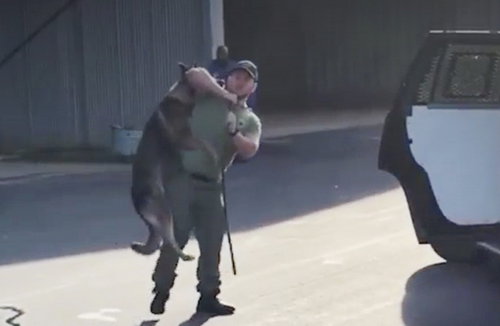 An outside agency will be conducting the review into the incident, and it will involve other K9 handlers and officers from other departments, Mr Stokes added.

The police chief went on to state that the actions displayed in the video could’ve been part of a training session for the dog, but he declined to tell reporters if the behaviour was appropriate or not.

“When a canine is noncompliant with the handler’s commands, the handler is trained to correct the dog,” Mr Stokes said. “Canine training tactics and corrective measures can sometimes be alarming out of context.”

Reports circulated that the officer, who Mr Stokes declined to identify, also used a taser on the animal. But Mr Stokes said those reports were false.