You can learn a lot about people by how they respond to a crisis. Adversity does not build character, it reveals it — so the saying goes. You can imagine, then, how much I have learned about my new home over the past year.

No one had a normal 2020, but America just does everything bigger: First came a deadly pandemic, then the largest protests in the country’s history, quickly followed by one of the most contentious elections of the last century.

Journalists are supposed to want to be near the news, but I had hoped for a softer landing to my new posting. I had spent the last five years covering the Syrian civil war, the rise and fall of Isis, multiple refugee crises, and a revolution in Lebanon, the place I called home. I planned to spend a few months getting to grips with the place before election season kicked off and the hard work really began. It didn’t quite turn out that way.

I arrived in February, and visited the office only twice before the coronavirus forced us all to start working from home. I searched for an apartment as cases reached worrying heights in New York, and found an apartment just a couple of weeks before lockdown.

Before I had been here a month, New York had become the new epicentre of the global pandemic. My first experiences of the city that never sleeps, my new home, were of walking around its completely deserted streets. The first time I saw Times Square it was completely empty. And the first stories I wrote about the city were about its immense suffering.

Makeshift morgues began to spring up around the city to cater for the rise in deaths in the form of refrigerated trucks and white dome tents parked outside of hospitals. Sirens echoed throughout the city at night. 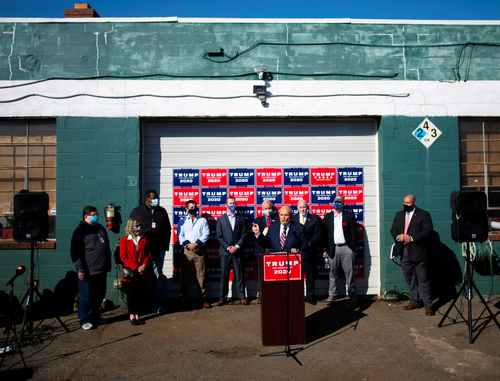 The first New Yorkers I met were nurses and doctors working on the frontlines of the pandemic. Most of the city was eerily quiet, but inside the intensive care wards where they worked it was a war zone. I remember spending more than an hour on the phone to an exhausted ICU nurse called Christianne Calderon back in April, as she told me how she was managing her home life and the intensity of her work.

“I’ve worked in New York for 15 years in the intensive care unit, and I’ve never seen anything like it. I feel like I’m in a foreign country,” she told me.

That stuck with me. The city that was so new to me was also new to the people who had lived here all their lives. We were all of us seeing this version of New York for the first time.

There were glimpses of light in the darkness, too. The phrase ‘New York Tough’ took on a new meaning. Delivery drivers and other essential workers who kept the city moving were honoured along with the frontline medical staff. People masked up, stayed home, and flattened the curve. The way people pulled together was nothing short of miraculous.

Just as the city was bringing the virus under control, the streets were transformed again. The police killing of George Floyd in Minneapolis sparked huge nationwide protests for racial justice and against police brutality. They would spiral into the largest protest movement in US history.

For a while, my new job began to feel like the old one. My last five months in Lebanon were spent covering a revolution: I would be out on the streets for hours each night dodging tear gas and following a rhythm dictated by the protesters.

Here, again, I was going out most nights, following that familiar rhythm. I would find a crowd and go with them wherever they went. On the second night out I ended up in front of a burning police car in the working class neighbourhood of Flatbush, Brooklyn, talking to a young crowd facing off against police, fireworks exploding behind me.

“It’s always been a thing here. Even when I was a kid going to school late, the police would stop you, take you into the police station. Excessive shit. Just always being oppressive,” said Dia Soyer, a 22-year-old resident of Brooklyn who came out to protest.

“This is the type of neighbourhood where people come because they are lower-income and they don’t have the resources that other people don’t have. They are here to survive just like everyone else. We need equality, we need police who care about us,” she added.

It was a complex story, but in many ways, my job in those first days was incredibly simple: put a microphone in front of the people who need their voices heard. Listen.

I thought about how long it would have taken me to get out there and meet people like Dia if the protests hadn’t taken me there. I might have lived here for a decade and not learned as much as I did in those few weeks.

I felt grateful that I got to see the country going through this change, and to learn. Soon after, I travelled down to Houston for George Floyd’s funeral. I stood outside the Fountain of Praise Church and listened to Raheem Smith talk about his friend’s death. Floyd had been transformed into a symbol from the moment he died, there hadn’t been time to talk about who he was: someone’s son, father, friend.

“Looking at George in that casket was like a stab in the chest, because he didn’t have to die,” Raheem said. “They could have let him up. ‘I can’t breathe. I can’t breathe. Let me up, please. Mama.’ He called for his mama twice and his mama’s been dead for two years.”

“The spiritual people say his mama was there saying come on George. I say he was in a state of shock, he wanted to live, and he thought his mama could help him. Delusional? I don’t know. When I call for my mama, I’m in pain.”

The protests ebbed and flowed over the summer, and the next story reared its head. I had moved to the US to cover the 2020 election, and here it was. I wasn’t expecting a normal campaign, but I hadn’t anticipated just how abnormal it would be.

There was a brief moment when the protests and the election were one story. In early August, the city of Kenosha, Wisconsin, was hit by violent protests over another police shooting of a young black man named Jacob Blake. Those protests drew in armed vigilantes, one of whom — Kyle Rittenhouse — fatally shot two protesters.

Those tragic events became the lens through which both Donald Trump and Joe Biden pitched their respective campaigns. Trump spoke of law and order, of crushing Antifa and defending the police. Biden argued that he was the person to heal the divisions that brought these opposing forces on to the streets in the first place.

I arrived in Kenosha late one evening, a day ahead of Trump’s visit, to find the centre of the town under curfew, completely deserted, shops and businesses boarded up, entire lots of cars burned and police checkpoints scattered everywhere. I was stopped twice by police as I drove around to get my bearings.

It looked as though these two competing narratives over racial injustice would define the campaign. But things shifted, at least as far as I saw it. It became clear early on that Trump’s re-election campaign was going to be different. He would do things no other president has done before to hold on to power. In no uncertain terms, he launched a full fledged effort to undermine American democracy.

When it became clear that millions more Americans would be voting by mail to protect themselves against the pandemic that was still raging, he began a steady stream of unsubstantiated attacks on mail-in voting — both in the courts and in practical terms. He tried to hobble the postal service, limit the number of drop-off ballot boxes and he falsely claimed the process was vulnerable to fraud without a shred of evidence.

The aim of this campaign was clear: Democrats were expected to overwhelmingly outnumber Trump’s own supporters in mail voting, so any limits placed on its use was going to help him. The president used the power and the pulpit of his office to subvert the democratic process.

I felt there was a gap between how foreign correspondents in the US spoke about Trump’s efforts and how some longtime political reporters did. Many who had spent years reporting on Trump were keen to pass it off as theatre, as Trump being Trump, but many of us who had covered authoritarian regimes elsewhere in the world saw alarm bells.

I was also able to see more of the country from the campaign trail. I saw Biden give his stump speech in Johnstown, Pennsylvania in front of an Amtrak station. Afterwards, speaking to people in the town, I was struck by how Trump’s support had remained firm in coal country despite the industry’s continued downturn.

I saw Trump speak in person for the first time, to thousands of his supporters in Sanford, Florida. I expected to see something up close that I had missed from watching his speeches on the television, some explanation for his appeal, some magic that I hadn’t grasped. I didn’t.

I went down to Georgia to meet black voters who were hoping to flip the state blue for the first time in decades. To North Carolina, where young people were changing the state’s demographics. I wrote about food banks in Orlando and rural North Dakota.

Election day took me to Philadelphia. I had spent a lot of time in Pennsylvania in the run up to election day because it was the state most polls determined would decide the election. Trump had signalled early on that Philadelphia would be a focus of his bogus claims of voter fraud. During one of the presidential debates he famously declared “bad things happen in Philadelphia.”

He was half right. Election day came and went with no result as the masses of mail-in ballots were counted. Trump fell behind in several key swing states but not by enough for the race to be called. After five days, the president announced that his personal lawyer, Rudy Giuliani, would be holding a press conference at the Four Seasons. He quickly corrected himself: Four Seasons Total Landscaping.

It was a fitting place to watch the Trump presidency end: in a nondescript lot on the edge of the city, next door to an adult book store called Fantasy Island.

The race was called just before Giuliani began speaking. The celebrations had already started when he arrived at the podium and delivered a spring of half-baked conspiracy theories about how the election was stolen from his client.

In the street outside of Four Seasons Total Landscaping, I watched a young woman named Jada Carter so full of relief and happiness at Trump’s loss that she performed a backflip in the middle of the street, in front of a handful of Trump supporters who had gathered.

I wrote at the time that that moment felt like an ending. Of what, exactly, I’m not sure. But as far as introductions go, America, that was a doozy.

Pentagon fires back at Tucker Carlson over pregnant women comments