Anti-vaxxers have been harassing a nurse from Tennessee who they are wrongly convinced is dead, after she fainted when receiving her coronavirus vaccine live on TV.

Tiffany Dover, 30-year-old nurse manager at CHI Memorial Hospital, and a mother of two, was chosen to receive the Pfizer vaccine live in front of the camera in December and fainted moments after getting the shot.

Ms Dover told WRCB following the incident that she felt fine not long after, that fainting was common for her and that she did not regret taking the vaccine.

“I have a history of having an overactive vagal response, and so with that if I have pain from anything – hangnail or if I stub my toe – I can just pass out,” she told the broadcaster.

However, The Daily Beast has reported that vaccine skeptics have latched on to the footage of Ms Dover collapsing, creating a conspiracy theory around her as part of anti-vaccine propaganda.

According to the website, a deceptively edited video of her vaccination making it look like she had died, leaving out the footage of her post-recovery interview, was spread online.

Despite several fact checks of the incident, including an evaluation from Reuters that declared the claim false, conspiracy theorists have since continued to harass the hospital and Ms Dover’s family.

In an attempt to debunk the theory, CHI Memorial posted both an official update on Ms Dover and later a video of her surrounded by colleagues holding dated signs at the demands of anti-vaxxers, WTVC reported. 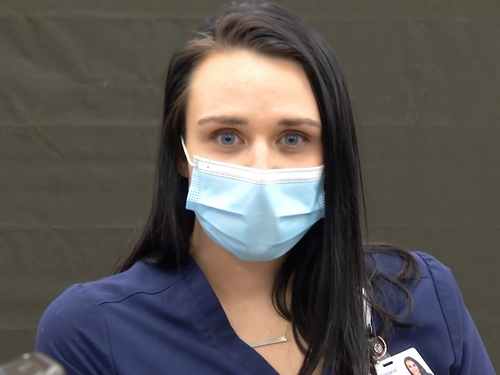 However, The Daily Beast reported that the conspiracy has only intensified online among anti-vaxxers, despite Facebook’s reported attempts to hide many search results for her name.

An analysis by the platform reportedly revealed that more than 400 posts about Ms Dover are currently available on the site, with most containing false information.

The website also reported that two groups with thousands of members dedicated exclusively to the conspiracy remain active.

Other users have also been incessantly harassing members of Ms Dover’s friends and family, despite requests from the hospital for privacy.

Both the nurse’s brother-in-law and sister-in-law are said to have shared an article debunking claims that Ms Dover was dead, which only angered the conspiracy movement.

On Ms Dover’s most recent Instagram post there are more than 11,000 comments, with one person commenting: “I don’t think I’ll ever stop until we get an answer guys.”

“If you are one person and you suddenly get hundreds or thousands of messages, some of them full of hate, it can be very traumatic,” Dorit Reiss, a law professor at UC Hastings, told The Daily Beast.

Prof Reiss, a pro-vaccine advocate, added: “It can have a real deterrent effect on posting positive messages about the vaccine.”

Elisa Myzal, a spokesperson for the Chattanooga Police Department, told the website that the department has also been overwhelmed by people asking what they were doing to investigate.

“The police department isn’t involved in this at all because there’s no crime, no death, no nothing,” Ms Myzal told the outlet. “So we don’t really have a strategy or a response.”

Speaking to the outlet, Australian Michelle Millmann, who runs a Facebook group titled “Where is Tiffany Dover?” which has more than 5,000 members and averages 30 posts a day, insists she is not an anti-vaxxer.

Ms Millmann, who reportedly follows a number of media figures who have downplayed the virus on her social media, said that when she saw Ms Dover faint, “it just really struck a chord with her.”

“In my heart, I believe something has happened to her,” she said.

When asked whether she felt guilty that the theory has led to harassment of Ms Dover and her family she responded: “Not at all. Why would I?”

A CHI spokesperson requests to comment on the conspiracy when contacted by The Daily Beast.

“We are not continuing to do interviews to once again debunk a myth that has been debunked numerous times by multiple credible news sources,” the spokesperson said.