Barack Obama delivered an unprecedented and stunning condemnation of Donald Trump’s presidency on Wednesday night, touting the “character and experience” of Joe Biden while essentially passing the baton – if in a lukewarm embrace – of the Democratic Party’s future to Senator Kamala Harris before she formally accepted its vice presidential nomination.

Rarely has a former chief executive spoken so darkly or bluntly about his immediate successor, with Mr Obama saying Mr Trump would “tear our democracy down” in order to win re-election. He appeared emotional as he delivered a broadside against the man who replaced him at the helm of the country and federal government, painting a portrait of Mr Trump as a threat to democracy, as well as Americans’ wallets and health.

The man who can sound like a reverend, a professor and a lecturing father all in one speech morphed into all three personas on Wednesday night – but it remains unclear whether his words can inspire key parts of his 2008 and 2012 coalitions to help make his former “partner” the 46th president of the United States.

“What we do these next 76 days will echo through generations to come,” Mr Obama said. “For close to four years now, he has shown no interest in putting in the work … no interest in finding common ground.” He accused Mr Trump of using the office to “help himself and his friends.” He called the consequences of Mr Trump’s term “severe,” and said the Democratic nominees would, if elected, lead the country “out of dark times”.

The former president accused the incumbent of using the Office of the President to try to prevent some Americans from voting so he can secure a second term. He also said Mr Trump and his entire administration would do whatever it has to in order to remain in power. 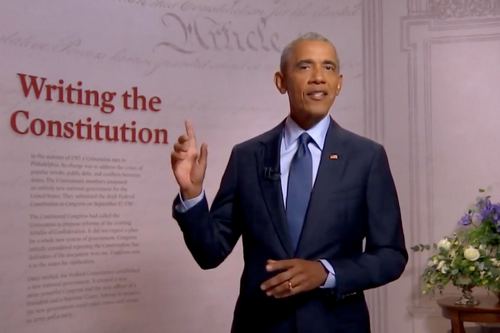 In his most blunt assessment of his successor, Mr Obama said Mr Trump deals in “crazy conspiracy theories” and accused him of using “the men and women in our military, who are willing to risk everything to protect our nation” as “his political props to deploy against protesters on our own soil.” And he said Mr Biden and Ms Harris, unlike Mr Trump, understand that political opponents aren’t un-American just because they disagree with you.”

“This month, this president and those who enable him have shown they don’t believe in those things,” he said, referring to his declarations that the “free press isn’t the enemy” and battling a pandemic depends on fidelity to the facts and science and logic.”

Mr Obama spoke at his party’s nominating convention four years after admitting Mr Trump’s 2016 victory – with 63m voters signalling a desire for a drastic change from his methodical, centre-left governing style – “stings”. His task for the event’s third evening was to defend his tenure, which will have a direct impact on his vice president’s chances in November, while also serving as the salesman in chief for his vice president and Ms Harris.

He also helped cap a night in which Democrats offered their most in-depth policy visions yet on everything from gun control and curbing the number of mass shootings to the climate crisis to finally enacting a comprehensive immigration plan.

Speakers like former Congresswoman Gabby Giffords, who was shot and badly injured in 2011 while in office, told personal stories of social ills they said would only be remedied by Democratic-crafted policies.

Speaking from Philadelphia, Mr Obama described Ms Harris as “more than prepared for the job” and referred to Mr Biden just as he did when he presented the longtime Delaware senator the Presidential Medal of Freedom with distinction near the end of his term, calling him “a brother”.

“Over eight years, Joe was the last one in the room whenever I faced a big decision,” he said of his two terms. “He made me a better president. He’s got the character and the experience to make us a better country.”

At times, however, his endorsement of the Democratic ticket seemed lukewarm. He also focused more on the collective character of Mr Biden and Ms Harris than any policy platform they are offering the country.

His mere presence in a premier speaking slot, the coveted second half of the 10 o’clock hour of the third night just before the vice presidential nominee’s speech threatened to overshadow both Ms Harris and his former No. 2. That’s because Mr Obama remains the most popular Democratic politician in the country, with a recent Monmouth University survey putting his approval rating at 57 per cent.

Mr Biden’s stands at 46 per cent. And only a slight majority, 54 per cent, approve of his selection of the former California state attorney general as his running mate.

He talked vaguely of the ticket’s “concrete policy” proposals and said, without explaining how, that Mr Biden and Ms Harris would end the Covid-19 pandemic and “rescue the economy”. Yet, he also said his Democratic colleagues care about both “people” and “democracy”, suggesting the president does not – also saying they “believe the president is not above the law”.

But Mr Obama’s much-anticipated address will be remembered for his full-throated takedown of Mr Trump, his character and his presidency.

“I did hope, for the sake of our country, that Donald Trump might show some interest in taking the job seriously, that he might come to feel the weight of the office and discover some reverence for the democracy that had been placed in his care,” the 44th president said.

During the 2016 campaign, he purposely avoided saying Mr Trump’s name. Aides said the then-commander in chief did not want to give the controversial former reality television show host and New York real estate executive more legitimacy than Mr Obama felt he deserved.

“But,” Mr Obama concluded about Mr Trump growing into the job, “he never did.”

Mr Obama’s words quickly garnered a reaction from Mr Trump, who let his feelings about the man who occupied the White House before him be known during a coronavirus briefing and then as Mr Obama spoke.

“WHY DID HE REFUSE TO ENDORSE SLOW JOE UNTIL IT WAS ALL OVER, AND EVEN THEN WAS VERY LATE? WHY DID HE TRY TO GET HIM NOT TO RUN?” the president angrily tweeted mid-speech. “HE SPIED ON MY CAMPAIGN, AND GOT CAUGHT!”

Hours earlier, he dubbed Mr Obama a “terrible” chief executive, and said his “ineffective” two terms were the reason voters put him in the White House four years ago.

“I see the horror that he’s left us. The stupidity of the transactions that he made,” Mr Trump added. “How bad he was.”

Hours later, Democrat after Democrat said it is Mr Trump who is “terrible”.

Ms Harris delivered her own bashing of the president as she formally accepted her nomination to become the first woman of colour to be a VP nominee for either party. She said “Joe will bring us together,” saying Mr Trump cannot. The former state attorney general took a major shot at Mr Trump, saying: “I know a predator when I see one.”

“Donald Trump’s failure of leadership has cost lives and livelihoods,” she added. “If you’re a parent struggling with your child’s remote learning, or you’re a teacher struggling on the other side of that screen, you know that what we’re doing right now is not working.”

Even former Secretary of State Hillary Clinton got into the Trump-bashing act, invited to give a rather lengthy speech.

“I wish Donald Trump knew how to be a president because America needs a president right now,” she said, not quite resisting the primetime opportunity to suggest it was Russian interference, not her own subpar campaign, that produced Mr Trump’s 2016 win.

“Vote, so we,” Ms Clinton said, “not a foreign adversary, choose our president.”

But the Trump campaign appeared ready for her claim, saying this in a statement issued moments after she spoke: “Speaking of fringe, it’s a perfect way to describe Crooked Hillary’s slide into the absurd ever since she failed to visit Wisconsin and lost fair and square in 2016.”

As Mr Obama spoke, the University of Southern California released its Daybreak Poll, which in 2016 showed Mr Trump leading from August until Election Day. The first version of the 2020 survey showed Mr Biden ahead nationally by 11 percentage points.

What is coronavirus drug Trump claims is a ‘cure’? Putin Slams Vaccine Criticism, to Get Jab on Tuesday 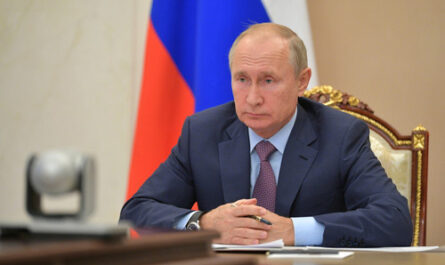