Protestors gathered in dozens of cities across Russia again this past Sunday, though in smaller numbers than the previous weekend. The siloviki’s tactic of intimidating demonstrators and isolating their organizers has apparently worked.

The authorities again detained activists one day in advance and warned journalists not to take part in the protests — in some cases, detaining them just to be sure. The tacit message to the public was clear: things will get rough, so stay away.

In Moscow and St. Petersburg, the authorities took the unprecedented step of completely blocking off the city center to pedestrians, closing several metro stations, rerouting city buses and even cordoning off potential rallying sites on Saturday.

A huge number of riot cops were deployed on the day of the protests, and not only to form human cordons. In some cities, they even outnumbered the protestors. The police blocked participants from reaching their planned meeting places, brutally dispersing them with tasers, batons, beatings and, in St. Petersburg, tear gas, according to Fontanka. Police in Kazan forced detainees to lie face down in the snow with their hands behind their heads.

By midnight on Sunday, the police had detained a record 5,135 people, according to OVD-Info, topping the record of the previous weekend by just over 1,000. Eighty-two journalists were also detained. What’s more, people in plains clothes and masks joined the police in making the detentions.

Russians are already accustomed to the fact that teachers and professors, as state employees, readily do the authorities’ bidding. They tell their students whom to vote for in every election and obediently dissuade them from attending protest rallies. 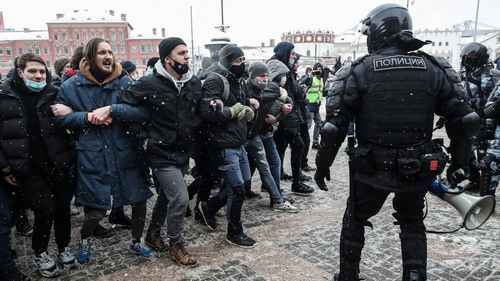 Even state officials and Russian Orthodox Church (ROC) leaders and priests are helping the Kremlin now. According to Sergei Chapnin, the churches of the Volgograd diocese received an appeal asking citizens to refrain from attending protest rallies and for parents to keep an eye on their children. With the bishop’s blessing, priests read the appeal after the Sunday liturgy. Patriarch Kirill delivered a sermon on the crisis of the younger generation on the day of the protests. And, during the protests in Moscow, riot police detained people near the Trinity Church in Lists.

Of course, churchgoers vary and church life differs from President Vladimir Putin’s so-called “power vertical,” but the patriarch does everything he can for that vertical and believers who disagree with him leave the church voluntarily — or otherwise.

It is, therefore, unsurprising that the ROC has essentially become part of the authoritarian state and carries out some of its functions. With a little imagination, voting could be moved from the usual polling places to churches, where it could be combined with confession.

After all, both are ostensibly confidential. The next step would be to make confession obligatory for all ROC members and to pass legislation enabling the Federal Security Service to listen in.

Roskomnadzor, the government’s media watchdog, issued a message stating that social networks would be blocked from posting “fake news” about the unauthorized protests.

The authorities label all instances of police brutality as “fake” automatically and grant only the Interior Ministry the right to say how many people turned out to protest. This is just a step away from the “war is peace” slogan in George Orwell’s 1984. How quickly Russia has fallen from its “sovereign democracy.”

Of course, Russia is not the same as the Oceania of 1984 — or even as modern China.

The Kremlin has no absurdly extremist ideology because it has no ideology at all. Russia has only a bureaucratic machine trying to implement mindless and illegal orders in the only way it knows how. After all, real tough guys hold power in Russia, and the only reason we don’t see them “mixing it up” in the streets is because most of them are too old for that now.

Jan. 31 marks the Day of Belarusian Science in that coyntry, and the Russian authorities seem to have mastered the subject. Putin’s minions now hound protestors in much the same way as the police serving Belarusian President Alexander Lukashenko do. When unrest recently broke out with their neighbors, Russians viewed Lukashenko as something approaching a savage, and themselves as members of civilized society.

That’s how backward things had become. Rumors even circulated that Russia would denounce Lukashenko and drive him from power — of course, for selfish motives, but ostensibly in defense of human rights.

And now, less than six months later, the same thing is happening here. Of course, there are no plans — at least that we know of — to build forced labor camps or shoot protestors on sight. However, more than one murder of a protestor has already occurred, as reported by Bellingcat.

In Belarus, Lukashenko rushed to defend his power, if not his life, when he failed to win re-election. In other words, he had a lot at stake.

But why have the Russian authorities decided to crack down on protestors?

True, the ruling authorities are not threatened directly by Navalny, but he does pose a severe personal challenge to them. His first offense was refusing to die as planned.

Second, he had the audacity to expose his would-be murderers, return to Russia and take a swipe at the president.

The problem, of course, is not so much that Putin feels insulted, but that Russia’s system of governance has been moving steadily towards dictatorship for the past year.

The constitutional and legislative changes adopted last year gave the authorities new levers of power and removed the old constitutional constraints. And now, the regime is unable to mount a political response to a political crisis. It was never very good at this, but in 2012, the authorities at least made an effort. Now, however, repression is their only tool — and the situation with Navalny definitely ranks as a true political crisis.

The repression will intensify and the protests will be labeled as criminal actions funded by Western intelligence agencies or, as happened in recent days, by Russian rogues.

The propaganda lacks subtlety — like Putin’s palace — but finesse is no longer needed.

The ruling regime sees itself in a state of war and, as the rulers of Russia’s hearts and minds, it must decide how it will shape the narrative. The protestors themselves are disposable, but the president must somehow explain to his core constituents what the story is with this palace, why the protestors don’t disappear, who this Navalny character is, and why the economy is in steep decline.

And the core members of Putin’s electorate will be happy to believe whatever ridiculous explanation they receive, as long as they can go on living as they have without changing their views. This is human nature.

Those on the fence might withdraw their support of the regime and experience a “crisis of faith.”

The youthful protestors will learn what it means to be detained and beaten and to spend time in prison, leaving them radicalized. Meanwhile, the siloviki will gain additional funding and authority to suppress the radical youth.

It all seems like something straight out of a Russian History lesson. The events are the same: only the names have changed.