The owner of the MV Ever Given, the container ship that is blocking the Suez Canal, has apologised for the delays caused by its grounding on Tuesday.

The 224,000-tonne, 400-metre-long vessel was en route from China to Rotterdam when it became wedged across the canal. Although it has now been partially refloated, work to fix the situation is ongoing.

As of Thursday morning, 150 ships were reported to be queueing to access the 120-mile-long canal between the Red Sea and the Mediterranean.

They are said to hold around 10 million barrels of oil and petrol, which could have consequences on global oil prices.

Shoei Kisen Kaisha Ltd, the Japanese firm that owns the Ever Given, issued an apology for the disruption on Thursday.

“We would like to apologise to all parties affected by this incident, including the ships travelling and planning to travel through the Suez Canal,” the company said.

It added that it was “determined to keep on working hard to resolve this situation as soon as possible”.

One expert has warned that there could be “massive implications” if the Ever Given, which is registered in Panama and operated by the Taiwanese company Evergreen, is not freed soon.

Glenn Koepke, of the logistics software firm FourKites, told NBC News that buyers usually allowed for a buffer of two to five days on deliveries. 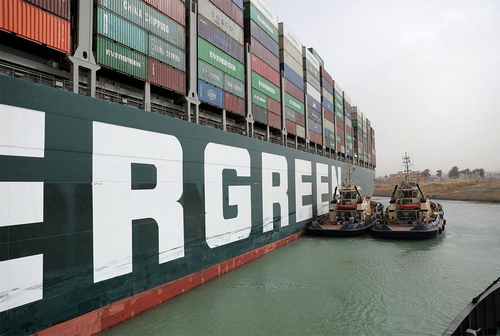 Mr Koepke said: “If they are able to clear the channel or pull the vessel to the side to allow traffic to flow through, then there should be minimal impact to consumers.

“If the vessel remains stuck for a week or more, this could have massive implications.”

The Dutch salvaging firm SMIT Salvage BV has been tasked with leading the rescue operations.

The Ever Given became stuck on sand at around 7.45am on Tuesday “due to strong winds”, according to Bernhard Schulte Shipmanagement, its technical manager.

“All 25 crew are safe and accounted for. There have been no reports of injuries, pollution or cargo damage and initial investigations rule out any mechanical or engine failure as a cause of the grounding,” the company added.

As tugs attempt to free the container ship, the Suez Canal Authority temporarily suspended traffic along the canal on Thursday.

The 13 ships which sailed south along the canal on Wednesday are now waiting in lakes en route, the authority said.