At least 14 arrests were made by Pakistani police in overnight raids on Thursday after a century-old Hindu temple was set on fire and razed by a violent religious mob led by Islamist clerics in northwestern Pakistan’s Khyber Pakhtunkhwa region.

Hundreds of people led by local Muslim clerics attacked the temple while chanting slogans in the village of Teri, in Karak district and set it on fire, according to reports. Videos of the mob attacking the temple were widely circulated in social media, prompting condemnation from human rights and minority groups.

The clerics had assured the police they would organise a peaceful protest against the alleged expansion of the temple, Rahmatullah Wazir, a police officer, told Reuters.

The report said the clerics leading the agitation started “provocative speeches”, following which the mob attacked the temple.

The mob also attacked an under-construction house close to the temple which was allegedly illegally occupied by a Hindu in a Muslim dominated area.

The people had announced demonstration a few days earlier, accusing the shrine of unauthorized expansion and demanded removal of it.

The mob was furious that the local Hindu community was given permission by authorities to renovate the building.

The demolition of the decades-old temple led to anger in people of Hindu faith, triggering protests with demands of justice.

Hindu, Christian, Sikh, and Ahmadiya minorities face persecution under strict blasphemy laws, which have resulted in a number of high profile cases in recent years. 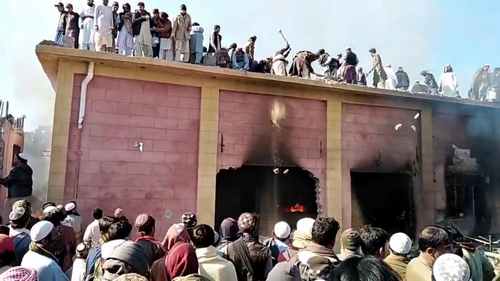 The US State Department declared Pakistan “a country of particular concern” for violations of religious freedoms earlier this month.

“Strongly condemn the burning of a Hindu temple by a mob in Karak, Khyber Pukhtunkhwa. KP government must ensure culprits are brought to justice. We as a government have a responsibility to ensure safety and security of all our citizens and their places of worship,” she said.

Several temples have been destroyed in Pakistan till now. In November, a Hindu temple was destroyed in Karachi after a Hindu boy was accused of making a blasphemous statement.

In July, construction of the first Hindu temple in Islamabad was halted after it was challenged in courts by Islamic activists. However, permission was granted by the state body last week.