A passenger jet en route to Honolulu has landed safely at Denver International Airport after it experienced an engine failure that caused parts of the plane to rain down on neighbourhoods near where it took off.

Officials with Denver International Airport confirmed to CNN that United Airlines Flight 328 took off from the airport on Saturday but then had to return after experiencing engine difficulties. The pilot was safely able to land the plane back at the airport.

During a press briefing on Saturday, a Broomfield Police Department spokesperson confirmed there has been no reports of injuries on the ground from the falling debris. “I’m shocked looking at this debris field … the fact that we are getting no reports of any injuires is shocking. It’s amazing,” the spokesperson said.

In released audio of the mayday call between air traffic control and the United Airlines flight crew, one pilot was heard saying the plane “just experienced a heavy engine failure” and needed “to return immediately” to the Denver airport.

A loud boom was heard by residents on the ground near the airport following takeoff on Saturday.

Police in Broomfield, Colorado, a northern suburb of Denver, then reported that they received calls from residents of large pieces of plane debris landing in the yards of nearby neighbourhoods. 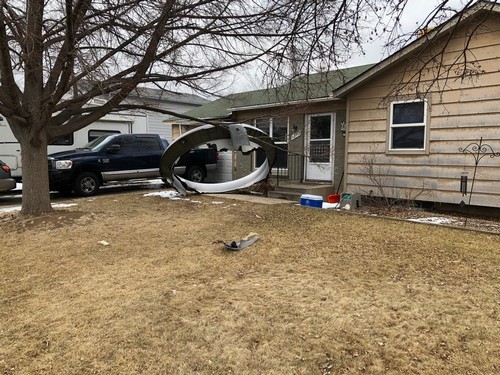 Several images shared by the Broomfield Police Department showed large pieces of the plane littered in front of several homes in the Northmoor and Red Leaf neighbourhoods, including one that appeared to depict a large piece of the engine. Plane debris was also located at Commons Park.

“The plane landed safely at DIA. We still haven’t received reports of any injuries,” the police department tweeted.

One resident on the ground shared an image of the airplane flying overhead, and it showed what looked to be the right engine on fire.

Then a video shared online by a passenger on the plane depicted a damaged right engine as the jet made its emergency landing. Passengers onboard were heard in the video cheering after the plane safely landed.

“A Boeing 777-200 operated by United Airlines returned to Denver International Airport and landed safety Saturday after experiencing a right-engine failure shortly after takeoff. The FAA is aware of reports of debris in the vicinity of the airplane’s flight path. The passengers deplaned on Runway 26-Right and were bused to the terminal,” the statement read.

“The FAA and National Transportation Safety Board (NTSB) will investigate. The NTSB will be in charge of the investigation and will provide additional updates. United Flight 328 was flying from Denver to Daniel K. Inouye International Airport in Honolulu when the incident occurred,” the statement continued.

No injuries were reported inside the plane upon landing and passengers had to evacuate directly onto the airport tarmac. They were then shuttled back to the terminal from the tarmac.

Broomfield police have implored residents in the area to not move or touch any plane debris if it landed near their homes. “The @NTSB wants all debris to remain in place for investigation,” the police department tweeted.

The police department was now working with NTSB to help rope off areas where the debris has landed and respond to any impacted residents. A spokesperson confirmed there were reports of some damage to homes, but could not answer yet to the extent of that damage.