Mike Pence was “on standby” to take over the presidency during Donald Trump’s unplanned visit to hospital last year, according to claims in a new book.

Plans for Mr Pence to take the presidency if Mr Trump needed surgery during a November 2019 visit to Walter Reed National Military Medical Centre were revealed in a review of a new book by New York Times reporter Michael Schmidt.

While Mr Pence did not end up taking that step, Mr Schmidt says in Donald Trump v the United States that the vice president was “on standby to take over the powers of the presidency temporarily if Trump had to undergo a procedure that would have required him to be anaesthetized”.

The White House’s press secretary at the time, Stephanie Grisham, said the visit was to begin parts of the president’s annual physical exam and that the president remained “healthy and energetic without complaints”.

Mr Trump’s doctor, Sean Conley, followed up two days after the exam with a memo saying the president’s “interim checkup” was routine and was only unplanned due to scheduling conflicts.

“Despite some speculation, the president has not had any chest pain, nor was he evaluated or treated for any urgent or acute issues,” Dr Conley wrote in the memo. “Specifically, he did not undergo any specialized cardiac or neurologic evaluations.” 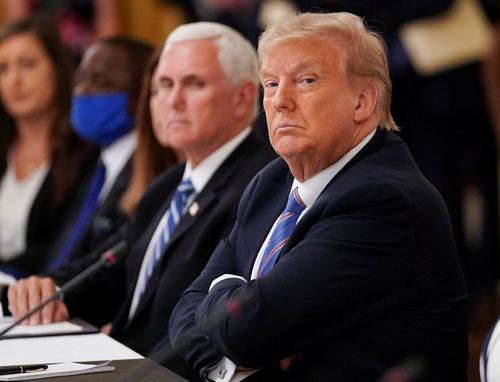 Any purpose of the unscheduled visit beyond what the White House confirmed has remained unclear, despite online activists claiming the president had suffered more serious health issues.

Dr Conley said in his statement that a full summary of Mr Trump’s labs and exam would be incorporated in the president’s 2020 annual physical report. Released in June, the annual checkup said the president remained healthy, with screenings for diabetes, cholesterol and blood pressure all within the normal range.

The report from Dr Conley revealed the president weighed 244 pounds, which when calculated with his 6’3” height gives a body mass index of 30.5. According to the CDC, that’s right on the border of “overweight” and “obese”, which starts at a BMI of 30 or higher.

Mr Trump’s visit to Walter Reed was among several revelations in the new book, including an incident in which Mitch McConnell allegedly fell asleep during a classified briefing on Russia. It is the latest in a series of books released in the lead up to the 2020 election from family and staff, like niece Mary Trump and former national security adviser John Bolton.