Texas police used pepper spray on a man, arrested him and denied him medical attention after he filmed his son’s arrest over a traffic violation in August.

On 15 August, a traffic stop for a wide right turned into an incident that resulted in Marco Puente, an emergency electrician, sitting handcuffed in the back of a cruiser with abrasive chemicals in his eyes.

The officers demanded Dillon Puente step out of the car and put his hands on the vehicle, and asked “why he was acting so suspicious.”

At the same time, Mr Puente — who was driving his work truck — noticed his son had been pulled over, so he called out to ask if he was alright.

Dillion Puente yells back that he had rolled up his window on the officer. Mr Puente then began filming the arrest, which further enraged the officers.

“You’re about to be arrested for blocking the roadway if you don’t park and get out,” the officer, Sgt. Blake Shimanek yells to Mr Puente. “You’re interfering with my job.”

Mr Puente was parked next to a curb on the far side of the street.

Following the officer’s instructions, Mr Puente parks the truck and then exits his car and walks along the sidewalk filming the encounter.

Mr Shimanek can be heard telling Dillion Puente it was suspicious that he was driving around with his window open – in Texas in August – but chose to roll it up once he’d been pulled over. 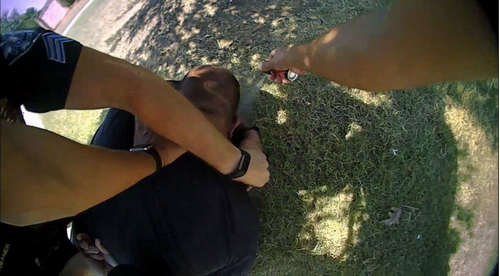 At that time, another officer, Antik Tomer, arrives at the scene and exits his vehicle. Mr Shimanek instructs him to “watch him,” referring to Mr Puente.

The father asks “watch me what, stand here?”

Mr Shimanek then escalates the situation by calling for Mr Tomer to arrest Mr Puente.

“Better yet, arrest him,” he says.

Mr Puente asks why he’s being arrested, and Mr Shimanek replied “for blocking the roadway.”

Mr Tomer grabs Mr Puente and tells him to drop his phone. Mr Puente continues recording, which Mr Shimanek responds to by putting Mr Puente in a headlock and knocking his phone out of his hand.

The officers then push Mr Puente to the ground and point a can of pepper spray at him, inches from his face. Mr Puente protests, yelling out that he did not do anything.

Mr Shimanek then tells Mr Tomer to spray Mr Puente, which he does. The officer even removes Mr Puente’s sunglasses and sprays him directly in his eyes.

At some point Mr Puente’s grandfather-in-law exits his house and begins yelling at the officers and begins recording as well. Mr Shimanek tells him to back off, which the man refuses to do.

In the video, Mr Shimanek complains about the pepper spray burning his arms and wipes it down with a towel, but tells Mr Tomer not to give a towel to Mr Puente.

Mr Puente was told he would be given medical attention at the jail by EMTs, but the officers told the EMTs to go to the scene after they had already driven away with Mr Puente.

Once they reach the station, the officers sit for another seven minutes in the car chatting while Mr Puente still has pepper spray in his eyes and across his face.

Eventually Mr Puente receives medical attention from jail attendants – not medical staff – who spray water in his eyes. He sat in a cell from 3pm to 9pm.

“I’m thinking about what the heck went wrong,” Mr Puente said. “I keep going back to that I did nothing illegal. Is it because this officer didn’t like what I was doing? Is it because he has more power than me?”

“So is that the reason they didn’t pursue him?” he said. “Did they get me because I’m a brown guy in a nice neighborhood? It kind of seems that way.”

The Keller Police Chief apologised for the officer’s actions, and demoted Mr Shimanek from sergeant to officer.

Mr Puente has filed a lawsuit against the department. His lawyer, James Roberts, said the officers’ decisions were baffling.

“I could ask ‘why?’ to basically every choice they made,” he said.

Scott Palmer, another one of Mr Puente’s attorneys, said the officer needlessly escalated the situation.

“This officer literally took nothing and made it into something,” he said. “He literally created havoc.” 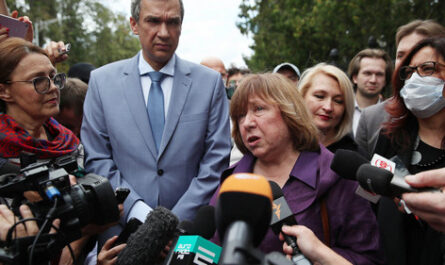 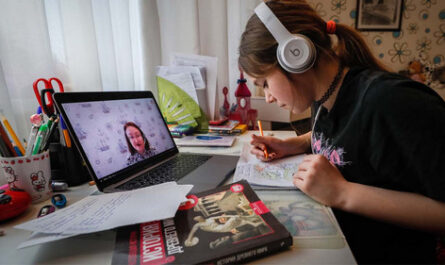