An Orthodox priest has claimed that he has been suspended by his diocese for three months and faces a “possible defrocking” after travelling to Washington, DC, to attend the “Stop the Steal” rally prior to the Capitol riots on 6 January.

Mr Hodges told the Dayton Daily News that he travelled to Washington, DC, on 6 January for the “Stop the Steal” rally that was organised by supporters of then president Donald Trump.

Mr Trump spoke to the crowd at the rally, urging them to “walk down to the Capitol” and adding: “You have to show strength, and you have to be strong.”

Following Mr Trump’s comments, members of the crowd walked down to the Capitol and breached the building, causing House representatives to barricade themselves in offices.

Five people died and several more were injured in the riots, as Mr Trump was impeached by the House for the second time for his role in inciting the rioters.

Rev Hodges confirmed to the Daily News on Wednesday that he did not enter the US Capitol building, and said that he does not condone the violence that occurred during the riots.

The priest claimed to The Lima News that he was suspended from priestly duties for attending the rally, and said that he could still be removed from the priesthood or have his suspension extended.

He said that archbishop Paul Gassios, who leads the Diocese of the Midwest, handed down the three month punishment and accused him of being “guilty by association.” 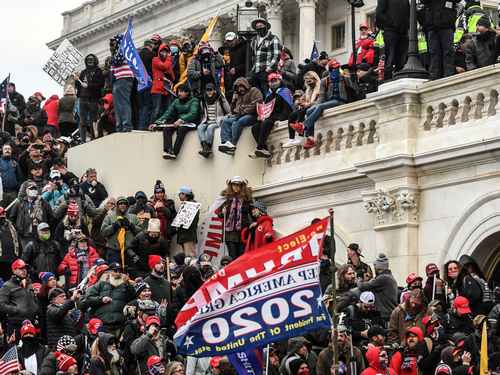 Rev Hodges told the Lima that he thinks the punishment is “an unjust suspension,” and claimed that the rally was “joyful, positive and orderly.”

However, priest Alexander Koranda disputed Rev Hodges claims, telling the New York Post in a statement that he “was not suspended due to his presence at the rally, or due to one specific event.”

Mr Koranda added: “This suspension is the result of various circumstances that is currently part of an internal process.”

Guidelines on the website of the Orthodox Church in America state that “clergy should refrain” from making political statements or “becoming fans” of political candidates on social media.

However, Mr Hodges urged others to join him at “mega MAGA rally” that became the event on 6 January in a post on Facebook.

“Whatever happens on that historic day, it will be an event to remember,” Rev Hodges wrote on his Facebook page, according to the Post.

He added: “You can tell your grandchildren that you were on the front lines in the Second American Revolution, where you fought to save the Republic.”