The letters of support and calls for donations came after four editors of independent student news site DOXA were charged with criminal incitement of youth and investigative journalist Roman Anin was questioned as a witness in an invasion of privacy investigation.

Some 271 academics signed an open letter calling the charges against DOXA editors Armen Aramyan, Vladimir Metelkin, Alla Gutnikova and Natasha Tyshekvich “preposterous.” The journalists face up to three years in prison for a video saying students had the legal right to attend pro-Navalny protests, which they had deleted earlier this year at the authorities’ request.

“The purpose of the charges were made clear by the judge — to silence critics,” the academics, including gender theorist Judith Butler and Slovenian philosopher Slavoj Žižek, wrote.

“Only one who uses education to manufacture obedience outlaws critical thinking as self-harm,” the letter added.

Kremlin spokesman Dmitry Peskov told reporters Thursday that DOXA “began as a student publication but for some time had taken on social-political character.” He declined to comment further on an ongoing investigation. 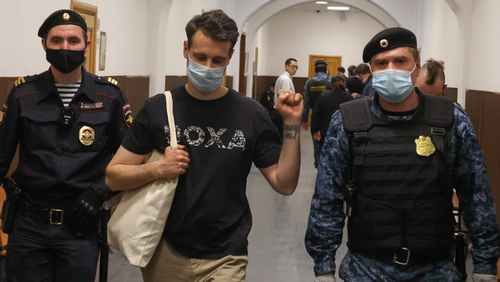 Support for the DOXA editors and Anin also came from YouTuber Yury Dud, who regularly speaks on political matters to the millions of followers who tune into his documentaries and sit-downs with Russian pop culture figures.

Quoting another journalist who was last year found guilty of “justifying terrorism” over her column about a bombing attack targeting the regional Federal Security Service (FSB) office, Dud compared journalists to street cleaners.

“Now imagine what happens if absolutely everyone stopped noticing the garbage surrounding us. At some point, it will turn into mountains and everything will turn into a fetid and uninhabitable garbage dump.”

Critics have decried the latest raids and arrests, alongside an anticipated treason trial against ex-journalist Ivan Safronov and multimillion-ruble fines against U.S.-funded Radio Liberty/Radio Free Europe, as a renewed crackdown on free speech ahead of key parliamentary elections this fall.