Atop Salt Lake City’s Capitol Hill, approximately 400 people, some heavily armed, descended upon the Utah statehouse. There, speakers led the horde in chants and several prayers that urged a higher power to intervene in stopping Congress’ electoral count to confirm Biden’s victory. “We recognize that storm clouds have gathered around us. We recognize that patriots are gathered in this city and throughout the country,” a kneeling man behind the mic said. “This is a battle…” he continued, “and though it is easy for us to feel anger, it’s easy for us to feel violence, help us to have an outpouring of love that lets us go forth without fear.”

During its first couple of hours, the gathering was a mostly peaceful affair. That was until Rick Egan, a photographer with local daily The Salt Lake Tribune, was harassed and pepper-sprayed, an exchange that Salt Lake City Mayor Erin Mendenhall called an “attack on freedom of press and democracy” on Twitter; one that “should not be allowed to go unchecked.”

The incident happened when protest attendees took issue with Egan’s documenting presence. “Look at you in your f—ing mask, you p—y,” one protester told him, according to the paper.

“Journalism is enshrined in the First Amendment of our country’s Constitution. And today on the lawn of Utah’s Capitol it was tossed aside,” Tribune executive editor, Lauren Gustus, wrote.

Even after the fracas, the rally went on uninterrupted, with members of the Proud Boys, as well as the locally bred Utah Citizen’s Alarm, gathered around its periphery, some chanting “All lives matter!” to a group of four Black Lives Matter supporters as a handful of state troopers looked on. At one point, one rally-goer accompanied by his black German Shepherd began shouting, “Black dogs’ lives matter” at the group, while another mockingly sang “Kumbaya.”

Minutes later, as Black Lives Matter supporters made their way closer to the Capitol building, one Proud Boy ripped away their signature flag, ripping it apart while tossing its metal pole to the side.

“We’re better than this,” a woman trying to temper the altercation kept repeating. 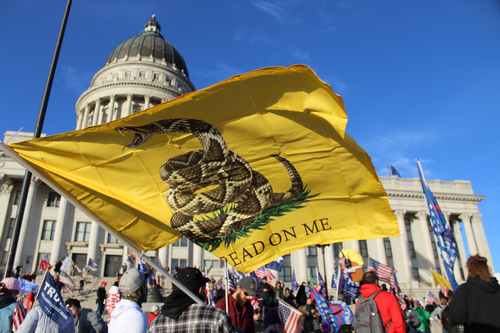 Amid the chaos, a lone rally opponent, Ashlyn Tolman, stood in silence, holding a sign emblazoned with the message: “Trump lost. Accept the confirmed results, not conspiracy.”

“I just think it’s important to… stand for, like, the side that you believe in—especially when it’s not very represented,” the 17-year-old said, after a pair of middle-aged women interrupted our initial interview. “You’re more patriotic than Biden,” one of the hecklers said. “I’m not for what you’re saying, but… you’ve got more balls than Biden, I’ll tell you that right now.”

Asked if she was concerned for her safety, Tolman shrugged. “I’m not too worried,” she said. “People just kind of say things, I don’t know, against me but I don’t think anyone’s… inciting violence or anything,” she said.

“So I think I’m OK—hopefully,” Tolman finalized, crossing her fingers. No Easy Answer on Belarus Sanctions