The leader of the far-right nationalist group the Proud Boys was arrested in Washington DC ahead of protests in the nation’s capital to support Donald Trump’s attempts to overturn the results of the presidential election.

Enrique Tarrio was arrested on Monday on destruction of property charges after he admitted to destroying a Black Lives Matter banner on a historic African-American church during last month’s violent demonstrations.

He also was in possession of two high capacity firearm magazines at the time of his arrest, according to a spokesman for the Metropolitan Police Department.

Tarrio, who is also a convicted felon, was subsequently charged with possession of a high capacity feeding device, which could carry a three-year prison sentence, if convicted.

At least four churches were vandalised during riots on 12 December. Rioters destroyed two Black Lives Matter banners at Metropolitan AME and Asbury United Methodist Church, both historic Black churches. Tarrio was wanted in connection with the destruction at Asbury.

Tarrio admitted in comments on the right-wing social media app Parler and on a Proud Boys-affiliated podcast that he was responsible for burning a church’s sign.

“In the burning of the BLM sign, I was the one that lit it on fire,” he said on the War Boys podcast last month. “I was the person that went ahead and put the lighter to it and engulfed it in flames, and I am damn proud that I did.”

On Monday, Tarrio as well as Proud Boys LLC and eight others who participated in burning church banners were targeted in a lawsuit from Metropolitan AME with the Lawyers’ Committee for Civil Rights Under Law. 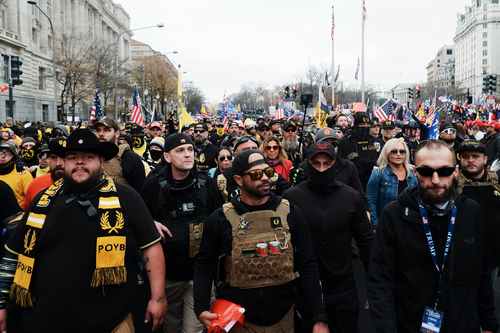 The lawsuit filed on Monday includes several pages of social media messages coordinating plans for demonstrations and violence on 12 December, including calls to stock up on guns and ammunition and “keep our enemies awake.”

“In countless messages transmitted over social media platforms and messaging services, Defendants and their co-conspirators promised that there would be violence in their wake, and, as the events of 12 December demonstrate, they made good on their promises,” according to the lawsuit.

The church and plaintiffs seek “compensatory, punitive, and injunctive relief, and aims, with this action, to ensure that nothing like this will happen again at the hands of Defendants, their affiliates, agents and co-conspirators – not to Metropolitan AME, and not to the thousands of other people and organizations that find themselves targeted for violence by the Proud Boys.”

US Attorney Michael Sherwin has described the attacks as hate crimes; the FBI has also sought information from the public to identify suspects.

“They harmed people of colour, and every person who lives and works in our city who believes in fairness, justice and racial equity,”  Mr Sherwin said in a statement last month.

Tarrio told The Washington Post last month that he would not admit to committing a hate crime because he believes the Black Lives Matter movement “has terrorized the citizens of this country.”

Washington DC Mayor Muriel Bowser has called on the National Guard as the city braces for more potential violence among the president’s supporters as Congress meets on 6 January to formally confirm Joe Biden’s presidency.

The president invoked the name of the male-only, neo-fascist organisation during the first presidential debate on 29 September, after debate moderator Chris Wallace repeatedly asked the president to denounce white supremacism. Trump has been accused of ignoring repeat warnings from his own administration about the rise of far-right violence and white nationalism, while he has relied on his own Justice Department to target left-wing demonstrators and prosecute his political opponents.

He said: “Proud Boys, stand back and stand by, but I’ll tell you what somebody’s got to do something about antifa and the left because this is not a right-wing problem. This is a left-wing problem.”

The same day of the debate, the FBI issued an intelligence report warning that far-right groups and white supremacists pose a “violent extremist threat” to the US, marking the time between Election Day and the 2021 inauguration as a “potential flashpoint” for violence.

The Southern Poverty Law Centre has identifed the Proud Boys as a hate group.

Though the group has claimed it represents an “anti-white guilt agenda” against “political correctness” as well as the “alt-right” label, the group’s membership has embraced white nationalism and espoused fascist views, including anti-Muslim and misogynistic rhetoric, often turning to violence.

“They work symbiotically with right-wing media and a power structure – helmed by Trump – that is eager to clamp down on protesters and enact political revenge on progressive constituencies like Portland,” wrote Ms Miller, arguing that the group and similarly motivated far-right groups are among political cudgels used as the administration’s street-level election campaign.