President Vladimir Putin did not discuss anticipated unification between Russia and Belarus during late-night talks with his Belarusian counterpart Alexander Lukashenko, the Kremlin said Friday.

Lukashenko met Putin in Moscow days after he said his security services had thwarted a coup plot in Belarus, and the Russian president denounced Western silence about the claims. Their summit was preceded by speculation from analysts that the leaders could announce long-talked-about unification.

“No, the merger of the states into one” was not discussed between Putin and Lukashenko on Thursday, Kremlin spokesman Dmitry Peskov told reporters.

“As for integration, it’s an ongoing process, a living mechanism,” Peskov was quoted as saying by the Kommersant business daily. “Integration issues are indeed regularly on the agenda.”

Putin has long pushed for closer ties in the form of a unified state with Belarus, a key transit hub for Europe-bound Russian oil that Moscow views as a buffer between Russia and the U.S.-led NATO military alliance. Lukashenko had balked at the idea until a disputed August 2020 election that triggered the biggest ever protests against his 27-year rule. 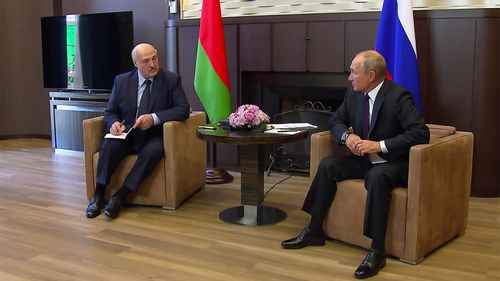 According to a Kremlin readout of their meeting, Lukashenko said that Belarus and Russia are making “good progress on union programs.”

“However, some pressing issues must be resolved, including security and defense in our Union State,” he said, referring to a loose bilateral integration treaty signed in 1999.

On Saturday, 66-year-old Lukashenko claimed that Belarusian security services derailed a U.S. plot to overthrow the government with Russia’s help. Putin said at his annual state-of-the-nation speech Wednesday that Western countries “pretend that nothing is happening at all.”

Putin Offers to Meet Ukraine President in Moscow ‘Any Time’

Russian President Vladimir Putin said on Thursday Ukrainian leader Volodymyr Zelensky was welcome in Moscow “any time” but stressed that he should discuss the conflict in eastern Ukraine with separatists directly.

“If we are talking about bilateral relations, then, by all means, we are ready to welcome the president of Ukraine at any time that is convenient for him,” the Russian leader said during a meeting with Belarusian leader Alexander Lukashenko in Moscow.

Putin’s invitation to Zelensky came in response to this week’s offer from the Ukrainian president for the two leaders to meet in eastern Ukraine, where an uptick in fighting between Kiev’s army and pro-Moscow separatists has raised fears of a return to full-blown war. 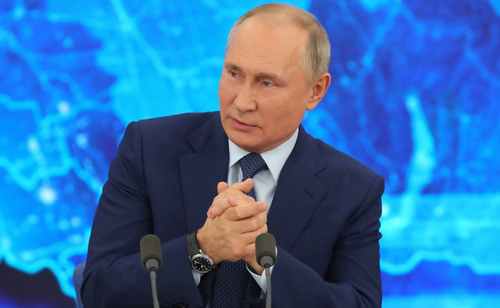 Ukraine, the European Union and the United States have recently sounded the alarm over Russian troops massing on the border of the ex-Soviet country.

Moscow has said troops are running military drills in response to NATO maneuvers, and Defense Minister Sergei Shoigu on Thursday ordered the troops to return to their permanent bases by May 1.

“If President Zelensky wants to start repairing relations, then we of course welcome it,” Putin told journalists at the beginning of negotiations with Lukashenko.

But the Russian leader said that if Zelensky hoped to resolve problems stemming from fighting in eastern Ukraine, then he should first meet with leaders of the breakaway regions in Donetsk and Lugansk.

“And only then discuss these issues with representatives of third countries, which in this the case is Russia,” Putin said.

Kiev has been battling pro-Russian separatists in the eastern Donetsk and Lugansk regions since 2014, following Moscow’s annexation of the Crimean peninsula.

The conflict, which has claimed more than 13,000 lives, has seen around 30 Ukrainian soldiers killed since the start of the year, compared to 50 in all of 2020.