A post on the former president’s fan forum The Donald reads “HEY FBI WE ARE ATTACKING THE CAPITAL ON THIS DATE”. It reads “April 1, 2021” with a cry-laughing emoji, a clown emoji, and a homophobic slur.

One commenter wrote: “We should keep doing this, but never show up, so they live in fear forever.”

Adherents to the cult-like delusion of the QAnon movement, the former president’s supporters, and Maga true believers – not all necessarily in the same right-wing ideological camp – arrived at different conclusions as to why an insurrection, let alone Mr Trump’s second inauguration, did not happen on 4 March, as some of the QAnon faithful and far-right memes anticipated.

The online chatter in recent weeks merited a fact-check by the Poynter Institute’s Politifact: “No, Donald Trump will not be re-inaugurated as president.”

But surrounding threats prompted public alarm from federal law enforcement and members of Congress – in stark contrast to the apparent lack of warnings before the deadly assault on the Capitol on 6 January.

That attack was preceded by weeks of plain-sight organising and explicit calls for violence across social media, leading up to the date a joint session of Congress convened to certify Joe Biden’s election to the White House. 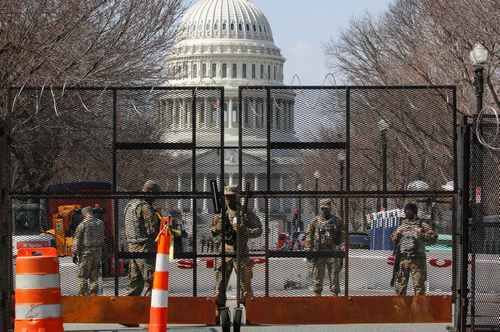 But on 4 March, the idea of an attack or the former president’s surprise inauguration across those platforms was a hoax, or a fantasy, and designed to make Trump supporters the fool.

“This is a lie the government created to make YOU the bad guy,” one poster said on Patriots.win, which hosts The Donald forum.

US Capitol Police warned one day earlier that it identified “a possible plot to breach the Capitol by an identified militia group”.

The FBI and Department of Homeland Security also issued a joint intelligence bulletin warning that far-right elements “discussed plans to take control of the US Capitol and remove Democratic lawmakers on or about 4 March”.

Melissa Smislova, the acting DHS intelligence chief, told senators on 3 March that the agency had issued the bulletin the previous night about “extremists discussing” violence on 4 March and 6 March.

Hours later, the House of Representatives moved its busy Thursday floor schedule into Wednesday night, cancelling its session for the remainder of the week.

“Today just proves that the House Democrats will use any excuse to get out of work,” read another post on The Donald, linking to a widely memed photograph of an elderly woman who joined rioters inside the Capitol, but depicted as Pepe the Frog.

Online extremist researchers – who sounded alarms ahead of the Capitol riots – have suggested that an undisclosed threat identified by law enforcement was not “anywhere near” those made before 6 January.

The QAnon phrase “where we go one, we go all” is all over the right-wing platform Parler, but users on the recently relaunched site are now largely focused on re-litigating the 2020 election, criticising congressional Democrats’ agenda and the Biden administration, antifa, and culture-war bait like the persistent Fox News debates over Dr Seuss and Mr Potato Head. It’s also full of liberals mocking Trump supporters on the platform.

But users on Parler and The Donald have largely written off QAnon and its adherents, whose urgent predictions about the former president and his administration have never panned out.

Over the last few years, QAnon – a decentralised belief system trafficking in antisemitic and racist tropes that have circulated for decades – aided the spread of disinformation and conspiracy theories tied to violence from obscure corners of the internet into mainstream channels across social media, latching on to existing conspiracy communities to launder its beliefs.

In the wake of the 2020 election, information “drops” from “Q” have diminished, and social media networks have effectively banned the cult-like movement from their platform.

But QAnon’s core elements – a war against a “deep state” and the belief in Mr Trump’s supremacism and a “stolen election” – are central to a growing body of the American right.

US polling in 2020 from UK-based non-profit HOPE not hate found a “depressingly high awareness and support” for conspiracy theories in the US, including those threaded by QAnon.

The report found that roughly one in 10 Americans are engaged with QAnon beliefs, with 4.6 per cent of respondents explicitly identifying as “strong supporters” and 5.4 per cent as “soft supporters”.

A third of Americans surveyed believe that “elites in Hollywood, government, the media and other powerful positions are secretly engaging in large-scale child trafficking and abuse”.

Why 4 March? It was the date of the presidential inauguration for years until the 1930s.

QAnon adherents also revived a conspiracy theory shared among the sovereign citizens movement that the US has not been a legitimate government since Ulysses S Grant left office in 1877. He was inaugurated on 4 March.

It’s the latest in a string of failed prophesies for an increasingly doomsday-oriented movement, holding out for the next event or signal to revive their chances of Mr Trump’s return.

In his remarks to Congress this week, FBI director Christopher Wray stressed that the 6 January violence “was not an isolated event”.

“The problem of domestic terrorism has been metastasising,” he said.

What did happen on 4 March?

That lie hangs in the shadow of the nation’s capital – razor wire lines fencing around the Capitol area where thousands of National Guard service members are stationed.

A DHS terrorism advisory bulletin due to a “heightened threat environment” across the US in the wake of the Capitol riots was issued in late January and remains in effect through the end of April.

The agency warns that “ideologically motivated violent extremists” motivated by “perceived grievances fuelled by false narratives” could “continue to mobilise to incite or commit violence”, DHS announced in January.

DHS officials warn that the riots could “embolden” others to carry out similar attacks against elected officials and government buildings.

“We have already made significant security upgrades to include establishing a physical structure and increasing manpower to ensure the protection of Congress, the public and our police officers,” Capitol Police said in a statement on 3 March.

White House press secretary Jen Psaki told reporters on 4 March that “the specifics of today’s threats, the FBI and DHS has warned … did not begin or end on 6 January, and we have been vigilant day in and day out.”

“We are seeing a years-long trend of false narratives fuelling violence, and the heightened security environment in the national capital region writ large is an illustration of that,” she said.