A joint intelligence report on the state of domestic violence extremism assesses that racially and ethnically motivated violence as well as violent militia groups present the “most lethal” threat among domestic threats.

Perpetrators of racist violence are “most likely to conduct mass-casualty attacks” against Americans, according to a newly unclassified report from the Office of the Director of National Intelligence, the Justice Department and Department of Homeland Security.

Domestic violence extremists, or DVEs, motivated by “a range of ideologies and galvanized by recent political and societal events” pose an “elevated threat” to the US in 2021, according to the report.

False narratives about the 2020 presidential election, the Capitol insurrection, and conspiracy theories and conditions related to the Covid-19 crisis “will almost certainly spur some DVEs to try to engage in violence this year”, the agencies reported.

The release of the report from Joe Biden’s administration follows remarks from DHS Secretary Alejandro Mayorkas, who told members of Congress on Wednesday that federal law enforcement has responded to threats involving individuals and small networks of people in the US adhering to an ideologically diverse range of motivations who are “willing and able to take those ideologies and execute on them in unlawful, illegal, violent ways”.

Officials also report that violent white supremacists are more likely to maintain “persistent and concerning transnational connections” with people with similar ideologies outside the US.

“We assess that a small number … have traveled abroad to network with like-minded individuals,” the report says.

Threats from violent militia groups “increased last year” and “will almost certainly continue to be elevated throughout 2021 because of contentious sociopolitical factors that motivate MVEs militia violent extremists to commit violence,” according to the report.

DVEs “exploit a variety of popular social media platforms”, encrypted chat apps and other websites to “recruit new adherents, plan and rally support for in-person actions, and disseminate materials that contribute to radicalization and mobilization to violence,” according to the report.

Officials report that the likelihood of future attacks is due to “escalating support” from people outside the US, as well as “growing perceptions of government overreach” with the new administration, as well as high-profile attacks emboldening and encouraging similar violence.

So-called “lone offenders” remain a persistent challenge for federal law enforcement to identify “because of their capacity for independent radicalization to violence, ability to mobilize discretely, and access to firearms”.

The president ordered an intelligence assessment to uncover the “origins and roots” of violent white nationalism in the wake of the attack on the Capitol on 6 January, domestic policy adviser Susan Rice told reporters just days after his inauguration in January.

“We have seen and it’s been plain for all Americans on their television sets just how serious a problem we face from nationalists and white supremacists who have demonstrated a willingness to resort to violence in some instances,” she said.

The National Security Council will also focus on domestic violent extremism, and intelligence agencies and administration officials will coordinate efforts to “craft and implement policies that will address this,” she said.

An unclassified intelligence report on the state of domestic violence arrives less than 24 hours after a spree of shootings in the Atlanta area killed eight people, including six women of Asian descent, amid a rise in violence and threats against Asian-Americans across the US.

“Whatever the motivation was for this guy, we know that the majority of the victims were Asian,” Mayor Keisha Lance Bottoms said on Wednesday. “We also know that this is an issue that is happening across the country. It is unacceptable, it is hateful and it has to stop.”

Last year, FBI Director Christopher Wray told members of Congress that the threat of far-right domestic violent extremism has risen to a “national threat priority” for 2020, posing a “steady threat of violence and economic harm” to the US while its underlying drivers – including “perceptions of government or law enforcement overreach, socio-political conditions, racism, anti-Semitism, Islamophobia, and reactions to legislative actions” – persist.

He echoed his agency’s assessment during a 2021 briefing, telling the Senate Judiciary Committee earlier this month that white supremacists and others committing racist violence remain the “top threat” facing Americans.

Days after Mr Biden’s inauguration, DHS issued a terrorism advisory bulletin due to a “heightened threat environment” in the wake of the deadly Capitol assault.

The agency warned that anti-government “ideologically motivated violent extremists” motivated by “perceived grievances fueled by false narratives” could “continue to mobilize to incite or commit violence” across the US. The advisory remains in effect through April.

The terror bulletin says “domestic violent extremists” motivated “by a range of issues” – including racism, Covid-19 “lockdown” measures, the results of the 2020 presidential election and “police use of force” – have “plotted and on occasion carried out attacks against government facilities”. 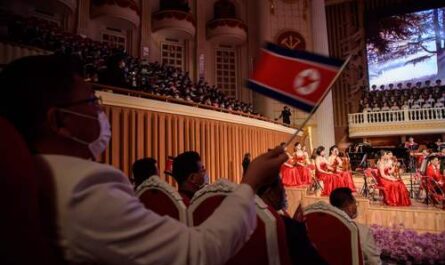