The climate crisis is being blamed for an astonishing predator-on-predator animal attack that took place in the Guatemalan rainforest, and was captured on camera.

The footage shows a male jaguar attacking and killing an ocelot, which researchers say is a rare occurrence and is likely due to the abnormally fierce – and growing – competition for water.

So rare is it that while researchers have previously noted signs of ocelot in jaguar faeces, this is the first direct evidence of a jaguar killing an ocelot – and the fact it was caught on film makes it all the more intriguing to experts.

The strike took place in the Maya Biosphere Reserve in March 2019, when northern Guatemala was experiencing a severe drought, the Mail reports, with researchers left stunned that the jaguar was shown allowing other prey to pass by unscathed before pouncing on the ocelot as soon as it stopped to take a drink of water.

Daniel Thornton, a professor at Washington State University’s School of Environment, told the Mail that “over-competition” for water, as a consequence of climate change, could make a jaguar attack another cat.

“People don’t often think of tropical systems as being dry, but in many parts of the world, tropical rains are quite seasonal,” said Mr Thornton, co-author of a report on the attack which was published in the journal Biotropica.

He said that, because of climate change, “some tropical ecosystems are expected to become even more seasonal”.

“The more isolated and rare water resources become, the more they’re going to become hotspots of activity,” he added.

While jaguars tend to travel on their own, stalking and ambushing smaller prey like wild pigs, deer, tapir and caiman, ocelots dine on rodents, birds, reptiles and insects. 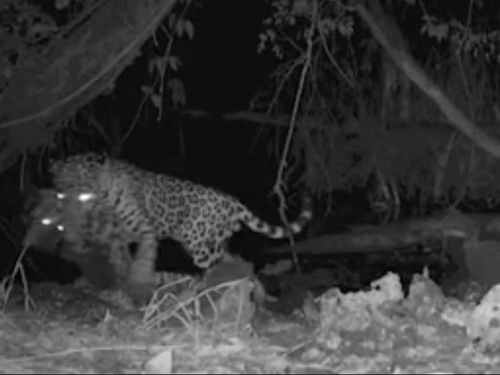 The kill was recorded as part of a larger project aimed at monitoring human impact on animals in northern Guatemala.

Researchers had cameras at more than 40 watering holes in the region but in the 2019 dry season, during which the attack was captured, only half the holes had water in them and none were within six miles of the spot where the attack occurred.

As such, the space became a popular and much-disputed location for jaguars to stalk prey. While the large cats characteristically avoid places their peers frequent, footage captured by the researchers showed seven different jaguars at the location – and even a fight between two of them.

“In these beautiful, green forests, we may not be aware that water flow is a serious issue,” said lead author Lucy Perera-Romero, a Washington State University doctoral student.

“It could be another source of mortality — apart from deforestation, from hunting, and from everything else that we do,” she added.

The Maya Biosphere Reserve in the Petén region of northern Guatemala, which accounts for a fifth of the country’s total land mass, has been managed by Guatemala’s National Council of Protected Areas since 1990.

However, the animals that live there remain under threat by human activities, including poaching and illegal ranching, logging and farming in restricted areas. And now, climate change too.

Mr García-Anleu, the co-author, said the area’s future is bleak. “Unfortunately,” he said, “climate change and associated droughts are predicted to worsen, which means tough times are ahead for wildlife that depend on watering holes for their survival.”