Russia has relaxed its coronavirus entry requirements to give citizens from a list of countries, including the United Kingdom, more options to cross its borders.

A government decree, signed last week, says citizens from any of the 29 countries with which Russia has resumed regular air connections can enter Russia via a flight from either their own country of citizenship or any of the other 28 countries.

Previously, foreigners were only permitted to enter Russia via a direct flight from their country of citizenship or the country where they held permanent residency.

The change means U.K. citizens will once again be able to enter Russia. Most have been unable to travel to Russia since Moscow temporarily suspended flights between Russia and the U.K. in late December, after Britain announced it had discovered a new mutation of the virus with significantly higher rates of transmissibility.

Flights between Russia and the U.K. are currently suspended until at least June 1. However, as Russia had previously restored flights with the U.K. following its mass shutdown of foreign travel at the start of the coronavirus outbreak, the rule changes will allow British citizens to enter Russia via one of the other third countries.

The U.K. government updated its travel advice for Russia on Friday afternoon to reflect the new rules. The Russian authorities have issued “guidance to nationals of various countries, including the U.K., that they could now travel to Russia via a third country as long as that country featured in the published list,” the update stated. 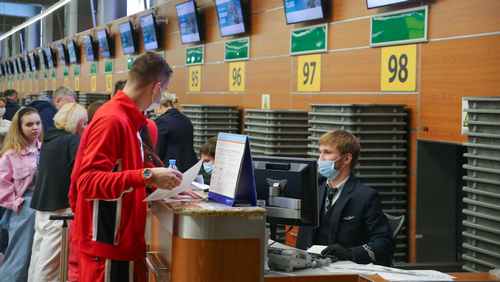 A representative of Russian flag-carrier Aeroflot confirmed it would now accept British passengers on flights to Moscow departing from any of the other countries.

The U.K. is expected to update its official travel advice — which still says British citizens can only enter Russia via a direct flight — to reflect the changes shortly.

“Before, nationals and residents could only enter Russia from their home countries,” said Dmitry Philippov, a visa and immigration expert at At Home in Russia.

“Now, nationals from any open country may enter by air from any other open country. For instance, a British national can enter Russia from the United Arab Emirates (UAE), a Finnish citizen may enter from Switzerland, etc.”

Other lawyers and immigration experts also confirmed to The Moscow Times that the rules cover Britain, despite the temporary flight ban.

“U.K. nationals, as well as those with a residence permit or other document confirming the right to permanent residence in the U.K., are entitled to enter Russia both from the U.K. and from other states according to the list,” said the Confidence Group, a Russian immigration firm, confirming the scope of the new rules.

“In other words, the rules … in no way limit the right to enter Russia depending on the opening of air links. There are no grounds to consider that the closure of air links with the U.K. could be a reason to restrict the right of U.K. citizens or residents to enter Russia from the other designated countries.”

Prime Minister Mikhail Mishustin signed off the changes on April 14 and they came into force on April 19, but have not been widely reported.

Irina Puchkhua, head of corporate immigration practice as Vista Immigration, said officials at Moscow’s Domodedovo airport had confirmed that they had updated their advice to immigration officials to accept British nationals travelling from the other listed countries.

Most nationals from other countries are barred from entering Russia on regular tourist, business and work visas under a far-reaching entry ban put in place at the start of the coronavirus pandemic last March. Exceptions are in place for family members of Russian citizens and those holding a Highly Qualified Specialists (HQS) visa.