Caroline Eden has made a name for herself by exploring roads less traveled, such as the Black Sea littoral, the subject of her eponymous previous book. In “Red Sands: Reportage and Recipes Through Central Asia, from Hinterland to Heartland,” she trains her considerable skills as a keen observer and evocative writer on the Central Asian republics of Uzbekistan, Kazakhstan, Kyrgyzstan and Tajikistan.

Eden uses the foods of the region as a device through which she explores countries and societies, and the catalyst for many of the taut and compelling essays that make up the book. The result is a rich portrait of a region that is experiencing seismic change, even as they preserve and practice millennia-old traditions.

Eden has thoroughly mastered the lessons of accomplished nomads: to travel slowly, allowing the landscape to shape the itinerary; to court encounters, however awkward, to stake a temporary claim to a tiny corner of a foreign land and make it a base of comfort, be it a particular seat at an unexpected pastry shop in Kazakhstan or a Turkish restaurant in Uzbekistan. Such knowledge serves her well as she makes her way in two separate journeys from the coast of the Caspian Sea to the Fergana Valley, through mountains, steppe, and the famous Kyzylkum (“red sands”) Desert from which this compelling collection of travel essays takes its name. 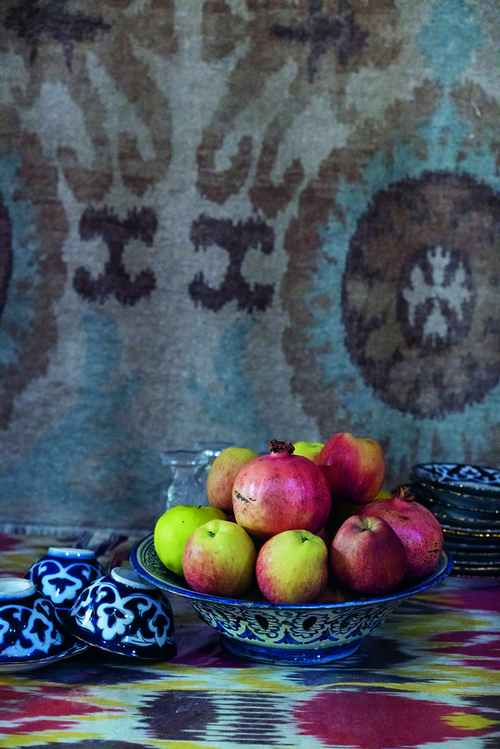 Central Asia is the epitome of an emerging destination, with all the accompanying discomfort and wonder that this entails. There are no tidy Potemkin villages in Eden’s Central Asia, and she does not flinch from the seamier side of her subject: much of Central Asia is riddled with unlovely construction, pockmarked by the ravages of the oil industry, stunted by seven decades of Soviet rule, and still plagued by the ever-present scourge of ethnic violence. These ills exist in equal measure with the moments of profound beauty Eden details in “Red Sands”: the quiet grandeur of a Buddhist monastery on the border with Afghanistan, the dazzling blue and turquoise tiles of Tamerlane’s Samarkand, and the majesty of an eagle swooping from on high down to the shores of the Seven Lakes of Tajikistan.

Newcomers to the flavors of Central Asian cuisine — or cuisines —  are in for a treat; Eden places these at the heart of “Red Sands,” providing a potent reminder that food shapes rhythm of a travelers day just as much, if not more, than do the road and its sights and sounds. With Eden joining us for meals, we embark on a discovery of  flavor: of tangy sea buckthorn syrup, sturdy Laghman — noodle soup — that puts the life back in you after a long day, magnificent plov, Uzbekistan’s incomparable communal national dish of rice and meat, the juiciest autumn melons in the world, and the simple, satisfying, chewy round loaves of non bread. 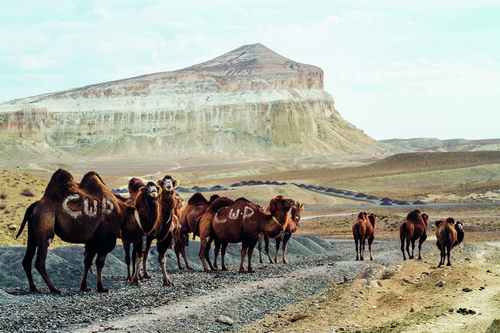 Here too are unforgettable portraits of the communities who make and enjoy this food: communal mosque kitchens, roadside shashlik joints redolent with the smell of grilled meat, and the languid peace of chaikhanas — Central Asia’s ubiquitous teahouses, where the weary traveler takes her rest, reclining in the shade on cushions, clustered around low tables, sips tea, and pauses for reflection and restoration.

“Red Sands” may be difficult to categorize, but it is a volume that will be equally at home in kitchens, on coffee tables, and at the top of the nightstand to-be-read stack, for within its well-illustrated pages are mind-broadening recipes not only for food, but for life itself, portals to an undiscovered world, and timely reminders of the inexorable pleasure and value of exploring the road less traveled. 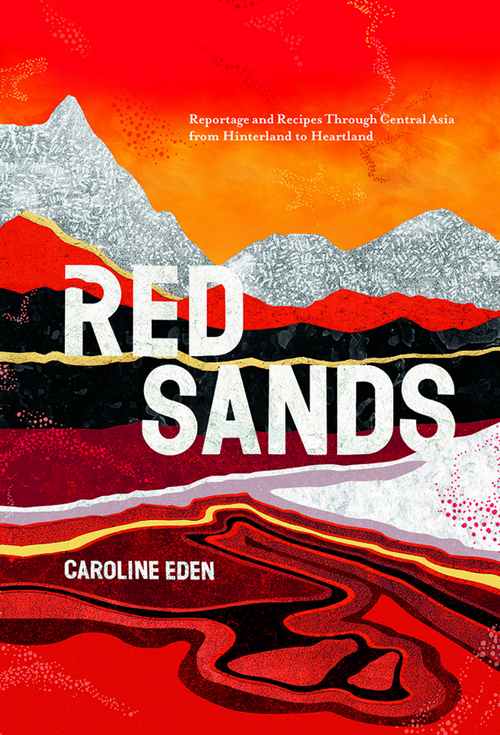 Lunchtime arrived and a world of culinary enterprise went on the move. Prams operated as moveable cafés, with Thermoses filled with tea and blankets swaddling freshly baked samsa and pies. Trolleys of kumys, fermented mare’s milk, went whizzing by, white and splashing. Kyrgyz believe kumys is a cure for a whole host of ailments from digestive issues and anaemia to typhoid and nervous conditions. Leo Tolstoy and Maxim Gorky both took kumys ‘rest cures’ at Russian sanatoriums drinking nothing but mare’s milk several times a day, for months. Some say Bishkek takes its name from the wooden spoon used to stir kumys.

A Dungan woman called Fatima, slowly steered her food trolley past us, ushering shoppers to ‘make the way free!’ Dungans, a Muslim minority ethnic group with communities in Kyrgyzstan and Kazakhstan, have closely preserved their culture, especially their food heritage. Despite arriving 150 years ago, they eat with chopsticks rather than forks and use distinctly Chinese flavours and ingredients in their cooking. Fatima’s takeaway plates were wrapped with all the ingredients necessary for a ready-meal of ashlan-fu, the most famous Dungan dish of all. Each one contained noodles, vegetables, sliced-up omelette and a sachet of vinegary sauce. ‘Just add water,’ she said pointing at the plates.

Trailing behind Fatima was a blind beggar with a singing voice as powerful as Pavarotti. Dressed in a kalpak, the traditional felt Kyrgyz hat, he was led at each elbow by an assistant. The trio shuffled slowly, each holding out a hand for banknotes, blocking the lane and stalling a huffy pickle hawker and a pomegranate juice pusher whose stereo speakers, attached to his cart, threatened to drown out the beggar. A trolley of plov got stuck in the melee. Two dozen boiled eggs had been artfully arranged in a semi-circle around the rice, which gave the appearance of a white-toothed smile. One man angrily barged past, yelling in Kyrgyz, his cheeks as pink as the dripping flesh of his cut-open watermelons. Central Asian tastes, cultures and flavours on the move.

‘There is one legendary samsa place, let’s go,’ Jalil said, steering me down a side lane. Tucked between the China and European zones, a man squatted by his tiny oven. Half-Turkish, half-Dagestani but a Kyrgyz citizen, he told us that his boss, the owner of the samsa business, is Uyghur. Square rather than triangular, the cook had arranged his samsa in lines so their corners pointed upwards like little a mountain range. Flaky, hot and moreish, mine cost less than a postage stamp back home, and was just one of 200 or so samsa that he will pull out of the oven this lunchtime. 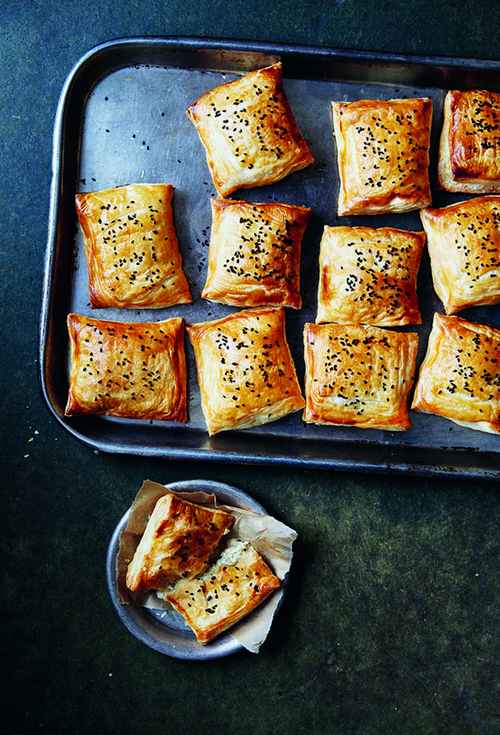 Essentially triangular Central Asian turnovers, samsa are eaten everywhere and are typically filled with lamb, potato or pumpkin. At Dordoi Bazaar, I had an unusual variation, a square chicken samsa that was light and flaky, its filling steaming and puffing as I bit into it. It is a perfect snack eaten hot on the spot. Here’s a quick recipe named after the legions of trucks and truckers that arrive and depart from Dordoi Bazaar, picking up a samsa or two for their long border-crossing journeys. The onion seeds make a nice addition but they are optional.