Jewelry makers at the House of Fabergé are hatching an exclusive $2.2 million gift for fans of the iconic HBO series “Game of Thrones” on the 10th anniversary of its premiere: a one-of-a-kind egg inspired by the show.

“The design references Daenerys Targaryen’s incredible journey and the importance of color within her costumes, her passion for her dragons, and the way she portrayed messages via her jewelry throughout her journey on the show,” The Hollywood Reporter quoted Clapton as saying Monday.

Featuring purple, blue, red, silver scales with diamond accents, the egg’s exterior was designed to resemble “the textures of the dragons and their iconic eggs.”

The interior, in turn, features a ruby-encrusted surprise: a miniature crown representing the crown Daenerys would have worn atop the Iron Throne, with a dragon’s head and wings rising behind it.

“With the crown, I referenced her dragons, their wings sweeping around protecting the beautiful Gemfields ruby that represents Daenerys, her house color, and her fierce quest to rule,” Clapton said. 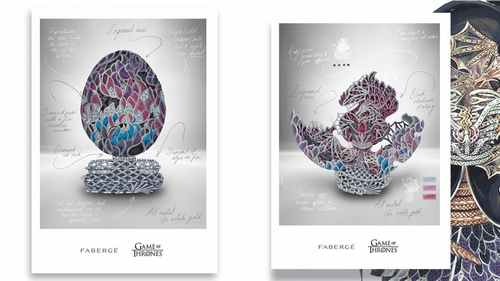 The entire egg structure is fixed on a small diamond-decorated pedestal resembling a dragon’s tail.

Though the final version of the composition will be presented later this year, Fabergé made its initial announcement to coincide with Easter and the launch of The Iron Anniversary project, a month-long celebration spearheaded by HBO to mark 10 years since the “Game of Thrones” premiere.

The House of Fabergé is world-renowned for crafting a series of 50 ornate Easter eggs for the Russian imperial family between 1885 and 1916.