One man died Monday in Belarus where police fired rubber bullets and tear gas for a second day to quash protests against a disputed weekend presidential election which handed a sixth term to strongman Alexander Lukashenko.

Svetlana Tikhanovskaya – a political novice who has managed to galvanize the opposition – called on Lukashenko, in power since 1994, to step down, saying she had won Sunday’s vote.

The whereabouts of Tikhanovskaya, a 37-year-old mother of two, were not known to her campaign staff on Monday night, her spokeswoman told AFP.

Tikhanovskaya had earlier said she would not take part in the demonstrations that have been brutally quashed, leading to widespread Western condemnation.

Police said a protester died when an explosive device went off in his hand Monday night, confirming the first casualty of post-election protests.

“One of the protesters tried to throw an unidentified exlosive device at members of law enforcement. It exploded in his hand,” the interior ministry said, adding that he died of his injuries.

Several thousand protesters took to the streets of the capital Minsk for a second night of post-election rallies, with opposition supporters shouting “Shame!” and “Long Live Belarus!” and waving flags or honking their cars. 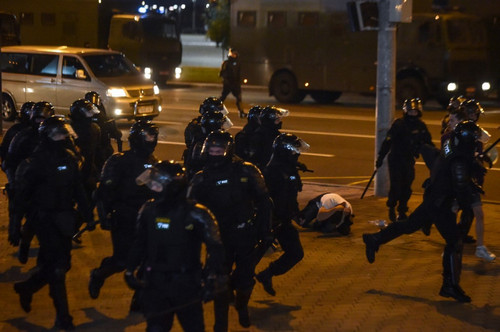 Police in full riot gear fired tear gas and rubber bullets on them and injured a female journalist, a witness told AFP. Blasts that sounded like stun grenades were also heard.

Independent Belarusian media including tut.by also reported the use of force, saying some protesters were erecting barricades.

Tikhanovskaya, whose surprise candidacy posed the biggest challenge to Lukashenko in years, said the vote had been rigged.

“The authorities should think about how to peacefully hand over power to us,” she told reporters. “I consider myself the winner of this election.”

“I tried to reach her for several hours but her whereabouts are unknown since she went to the election commission to file a protest over the vote count,” Linas Linkevicius told AFP late Monday.

“It raises concern about her safety,” Linkevicius told AFP.

Earlier Monday, election officials confirmed Lukashenko’s re-election for a sixth term, saying he had won more than 80% of the vote, with Tikhanovskaya coming second with 10%.

The 65-year-old former collective farm boss has ruled ex-Soviet Belarus since 1994, stamping out dissent and earning the nickname of “Europe’s last dictator.”

The White House said Monday it was “deeply concerned,” adding that “intimidation of opposition candidates and the detention of peaceful protesters” were among numerous factors that marred the election and its aftermath.

European governments also questioned the results, with Germany voicing “strong doubts” about the conduct of the vote and France urging restraint.

Lukashenko was defiant, vowing he would not allow Belarus to be “torn apart.”

“We recorded calls from abroad. There were calls from Poland, Britain and the Czech Republic, they were directing our – forgive me – sheep,” Lukashenko said.

Thousands took to the streets of Minsk and other cities on Sunday night to denounce the vote, sparking clashes with members of law enforcement.

The interior ministry said dozens were injured in the capital, accusing some protesters of sparking confrontations.

The Belarusian Investigative Committee said it had opened 21 criminal probes into “mass unrest” and using violence against police and detained more than 80 people.

“I am ashamed of what interior ministry forces did, I served in these forces,” Sergei, a 45-year-old sheet metal worker, told AFP. Red Rainbow Coming Soon to a Small Screen Near You