In a recent opinion piece for the Russian news agency TASS, Dmitry Medvedev manages at once to be an avatar of Kremlin schadenfreude over the state of U.S. politics, an emissary to the incoming Biden administration, and a herald-of-sorts of his own revival as a serious politician.

Of course, one of the problems with Medvedev’s statements, especially these days, is determining whether he believes what he says, or just says what he is meant to believe. His trajectory from President to Prime Minister to ‘is this a real job or not?’ deputy chair of the Security Council (SB) does look like a distinct fall from grace, and there is a sense that he may be fighting for his political life and relevance, especially in the long, dark shadow of SB secretary and national security advisor in all but name Nikolai Patrushev.

His latest, lengthy piece, while at first shaping up to be a quintessential example of Kremlin whataboutism and projection, actually contains some signs that by accident or design, Medvedev might be able to prove that he is still of significance, and have some encouraging things to say.

To get there, though, the reader does have to wade through a smirkingly earnest exegesis of the way that “this presidential campaign, likely the most scandal-ridden in history, proved that the flaws in the U.S. electoral system have a comprehensive nature.”

Of his critiques, some are true, some are downright false, and all reflect a considerable bias towards mirror-imaging, an unconscious assumption that the American system is more like the Russian one than they would like to admit.

Medvedev paints a picture of a fake and state-managed democracy that sounds rather more Muscovite than Washingtonian: “At first, everything seems quite presentable: alternative candidates, primary elections, and live TV debates. But this is a façade, a nice stage set which determines the spectacularity of the event and, naturally, the preferences of the voters.”

This was, it has to be said, the assumption I encountered in Moscow, over and again, before the last elections. As one Russian foreign ministry staffer put it to me, “the American establishment will not allow a Trump to be elected.” Given what happened, you’d have thought that there might have been some rethinking by now.

Instead, Medvedev continues: “U.S. citizens themselves have called into question their country’s conformity with the main criterion of democracy — the ability of the state to ensure fair and transparent expression of the people’s will in general.” Furthermore, “Accusations against the federal government of exceeding its authority in using force to suppress riots have exposed cracks in American federalism, which the central government (regardless of party affiliation) prefers to conceal as far as possible.”

Here, he is on firmer ground. Like it or not, and true or not, such accusations are being made, and America’s easy claims to be the arbiter and advocate of the spirit of democracy, something that has so frequently angered Moscow — “this is hardly consistent with those norms of democracy that Washington arrogantly imposes on other countries” — are harder to sustain with quite the same confidence.

The lengthy critique, though, is in some ways the necessary preamble, a little bit like the obligatory references to Leninist theory at the start of a Soviet dissertation. The real messages are wrapped within it.

First of all, there is a striking recognition of America’s near-primacy in the world. Medvedev starts with the usual portrayal of the U.S. as the angry bull elephant in the room — powerful, yes, but a negative force: “The problem is that the rest of the world finds it increasingly ‘inconvenient’ to work with such a country, as the U.S. becomes an unpredictable partner.” That has been admittedly more true in the past four years than it is likely to be in the next.

However, he also recognizes “the special place of the U.S. in the architecture of international relations” and returns to the question of the need for both stability and positive engagement on everything from the climate change agenda to global trade.

That means, inter alia, talking to Russia. He stresses that even “the Trump administration consistently strengthened the systemic confrontation between Washington and Moscow” and that “Biden has not yet said anything positive about Russia. On the contrary, his rhetoric has always been openly unfriendly, harsh, even aggressive.” Thus, “we expect it is highly likely that the United States will consistently pursue an anti-Russian policy.” 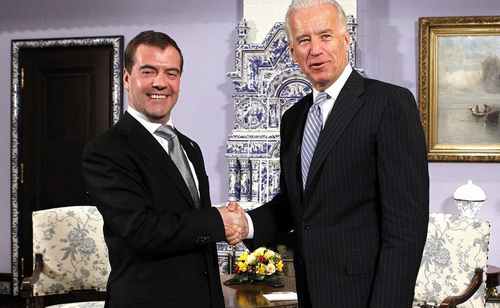 “Russia, on the contrary, is ready to work with any U.S. president, ready to restore cooperation in a wide range of areas.” In particular, he singles out arms control, noting that “the U.S. is trying to restore to a certain extent its image as a reliable strategic partner.” He added: “pledges to extend the START III treaty with Russia, which Biden called ‘an anchor of strategic stability between the United States and Russia’, sound very optimistic.”

This is part of the same diplomatic offensive that, perversely, has seen Moscow publicly state that it is following Washington in withdrawing from the Open Skies agreement, much to European dismay. Given that this withdrawal is a process that will take months, the hope is that this concentrates the mind such that the agreement can be salvaged. Russia will be testing the Biden administration’s will, but also its intent.

Then there is the social media issue. It is not just Russia’s opposition that has been dismayed by the recent demonstration of the power of de-platforming, as Trump and his cohorts have become online non-people. Medvedev channels the Russian state’s concerns that what starts in the realms of online chatter (“media war without rules!”) could become something more pervasive: “It turns out that several technological corporations located in California got an appetite for power and thought it possible to juggle with news and facts to suit their own political preferences. This is but blatant censorship!”

The subtext is that the platform power of predominantly U.S. corporations could be weaponized by Washington. After all, what Russian mega-corporation can afford not to do the Kremlin favors? Again, this is driven by crass mirror-imaging, the assumption of greater similarities than really exist, but it is a genuine concern, and one which Moscow is not alone in expressing.

So this is Medvedev’s pitch.

On the one hand, he is still the conciliatory figure. Like Janus, the Security Council now has two faces, Patrushev’s frown and Medvedev’s smile. After all, he is strikingly complimentary to the U.S. for a Russian politician, not least noting that “the American political system has proved its flexibility over the course of centuries. I am sure this time it will cope, too.”

In a direct rebuke to those applying the tired “Putin is smiling” meme to the story of American discord, Medvedev says: “We do not want the U.S. to have problems. And for practical reasons: such problems create waves of instability all-around that overflow us as well.” Nonetheless, he makes it clear that “the problems of the U.S. can only be solved by the Americans themselves along with the good governance of the country.”

So in policy terms, he is pushing for Washington to re-engage with Russia in the name of mutual security and on the basis of situational pragmatism. No grand bargains or re-resets, but concrete measures on arms control, climate change and global stability.

And, well, something on the power of social media and the need to address “the unprecedented role in public politics of social networks and new media, and, accordingly, of private IT companies that own those platforms.”

So this is also part of Medvedev’s own push for political rehabilitation.

That he was not simply consigned to the Security Council as a half-way house before retirement or rustication was suggested by the way he chairs two new commissions, one on the Arctic — an area of growing strategic interest — and the other on national responses to new infections, clearly relating to the pandemic. He is, in other words, looking for new niches within the security realm to make his own, while Patrushev maintains his grip on the usual spooks-and-soldiers ones.

Just as during his presidency, he tried to present himself, with distinctly limited success, as the tech president, so too emerging, non-traditional security is presumably his new thing. And in this article, he makes the case that U.S. voting system reform and thus wider political restructuring is a global issue, and “the international community is already paying too high a price for the U.S. reluctance to change” because of the way instability within America ripples round the world.

At once criticizing America and also recognizing its global centrality. Highlighting the numerous failings of the U.S. political system and yet at the same expressing confidence in its resilience. Encouraging specific common-sense cooperation without demanding it be part of some comprehensive deal or linking it to issues such as Ukraine.

Put aside some tediously predictable opening rhetoric and it’s almost enough to make me miss Dima.