A Minnesota attorney who “bamboozled” voters into signing legal challenges to the November election against five congressional Democrats has been fined thousands of dollars.

Attorney Susan Shogren Smith, who was a member of the Minnesota Election Integrity Team (MNEIT) was given a $10,000 sanction on Friday after a judge found she duped people into signing complaints as plaintiffs, The Pioneer Press reported.

Amid the ongoing election disputes last year, Ms Shogren Smith is said to have filed five complaints in Ramsey County District Court, naming Secretary of State Steve Simon and the Democratic candidates who won their Congressional races as defendants.

The legal challenges were reportedly filed in the names of 14 separate voters and at least four of those involved were not aware they were participating, The Pioneer Press said.

Mr Castro reportedly ruled in the defendants’ favour on 18 December and closed the cases, but in February, Republican activist Corinne Braun realised she had been unknowingly involved in one of the suits after searching her name on the state’s online court records system.

“To my horror, I saw that I had sued Steve Simon and Ilhan Omar. It was a surreal moment for me,” she said, apparently comparing the moment to having her car broken into.

Ms Braun had unknowingly signed an affidavit in an anonymous email requesting she add her name to a list of dissatisfied voters.

The activist said she filled out the form and signed her name before forwarding the email to about 5,000 people on her mailing list

According to Ms Shogren Smith the affidavit agreed she “will be joining with other voters across Minnesota to contest Minnesota election results.”

Ms Braun said she believed she was doing the same as “going online and signing a petition” and didn’t understand the implications. She said: “As a lay person, an affidavit doesn’t mean anything.”

The MNEIT defines itself as “a group of volunteers and legislators dedicated to the fight for Election Integrity in Minnesota.”

The group attempted to prevent the state from certifying its election results amid false claims from Donald Trump that the election had been “stolen” through fraud.

A number of federal and state government officials have confirmed they found no evidence that votes in the 2020 presidential election were compromised on a large scale.

Their website encourages “anyone who supports the challenge of these elections to stop the election fraud happening in MN and wants to be listed as a ‘Voter Contesting the Elections’” to complete an Eligible MN Voter Affidavit.

Ms Braun and two other unwitting plaintiffs were ordered to pay $3,873 to the defendants at the conclusion of the case and MNEIT ended up paying the court costs.

Ms Shogren Smith reportedly acknowledged she never spoke with the plaintiffs or informed them of the outcome of the case or the fact they had been ordered to pay the large sum.

The attorney said she believed someone else with MNEIT was going to inform the plaintiffs of those details.

“I absolutely believed that those conversations were happening with these plaintiffs,” she said.

The newspaper reported that Ms Braun’s name and those of another two plaintiffs are set to be taken off the case concerning Ms Omar. 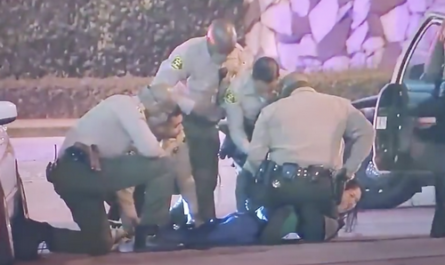