More than 200 people were airlifted to safety late on Saturday after a fast-moving wildfire trapped them at the Mammoth Pool Reservoir in California’s Sierra National Forest.

The fire, which started burning on Friday, cut off the only road out of the popular recreation site, leaving many trapped.

Black Hawk and Chinook helicopters were used for rescues that started late Saturday night into the following morning, according to the California Office of Emergency Services.

About 20 evacuees had injuries ranging from broken bones to burns. Two people had to be carried on a stretcher, Madera County Sheriff Tyson Pogue told CNN.

“The situation only can be described as just hellish conditions out there for those poor people,” Mr Pogue said.

Two people reportedly declined evacuation services and decided to stay behind at the reservoir.

Footage and pictures have since been released following the harrowing night of rescues.

In one picture, shared by the National Guard, it showed about two dozen people packed into a helicopter as they were airlifted away from the forest fire. 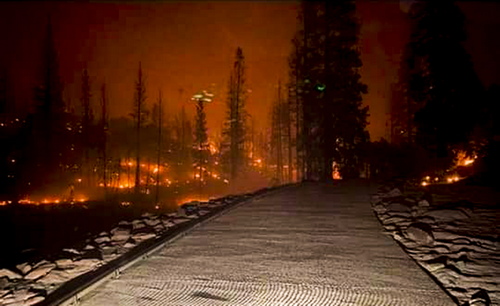 Video footage captured by Juliana Park showed her escape by car just outside Mammoth Pool Reservoir. In the video, flames surrounded the vehicle while she made her escape.

“A backpacking trip cut short by unforeseen thunder, ash rain, and having to drive through literal fire to evacuate #SierraNationalForest in time,” she tweeted.

“Grateful to the SNF ranger who led us down… wish we … got her name.”

The fire, named the Creek Fire, is still burning through Sierra National Forest as of Sunday afternoon and  has prompted new evacuations.

The Fresno County Sheriff’s Office ordered everyone in the Shaver Lake community to evacuate immediately.

“There is an imminent threat to life and property due to the fast moving Creek Fire,” the office said.

The wildfire started on Friday evening and quickly grew in size to engulf 36,000 acres in just one day. As of Sunday morning, it has burned 45,000 acres. What started the fire is still under investigation.

Mr Pogue said on Sunday that they believed everyone had been rescued from the Mammoth Pool Reservoir.

About 450 firefighters are battling the wildfire with the help of three helicopters and three air tankers, according to the Forest Service.

But the current California weather conditions have made battling the blaze a challenge for firefighters. The National Weather Service issued an excessive heat warning for the area, as temperatures reached up to 112 degrees Fahrenheit (44C). The heat warning will last until Monday night.

As of Sunday, 0 per cent of the Creek Fire was contained.