Demonstrators in Myanmar took to the streets again on Tuesday to protest last month’s seizure of power by the military, as foreign ministers from Southeast Asian countries prepared to meet to discuss the political crisis. Police in Yangon, Myanmar’s biggest city, used tear gas against the protesters.

The planned special meeting of the Association of Southeast Asian Nations comes in the wake of worsening violence in Myanmar. The country’s new military rulers over the weekend escalated their use of deadly force and mass arrests to try to quash protests against the Feb. 1 coup that ousted the elected government led by Aung San Suu Kyi

The U.N. said it believed at least 18 people in several cities were killed on Sunday when security forces opened fire to disperse demonstrating crowds. Funerals were being held Tuesday for several of the victims.

The authorities also detained more than 1,000 people over the weekend, according to the independent Assistance Association for Political Prisoners.

Those detained included at least seven journalists, among them Thein Zaw of The Associated Press. At least two dozen journalists have been detained since the military’s takeover.

Hundreds of protesters gathered on Tuesday in the Hledan area of Yangon, where a day earlier police had fired repeated rounds of tear gas canisters. The protesters, many of whom wore construction helmets, dragged bamboo poles and debris to form barricades to impede any attempt to rush forward and make arrests, and chanted slogans and sang songs at the police lines. 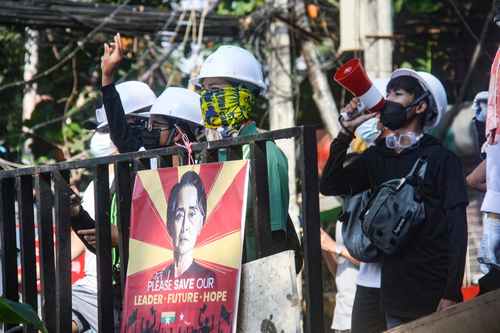 Tear gas was used again Tuesday. The demonstrators — hundreds of mainly young people — fled in panic but soon returned to their barricades.

Protesters also took up their flags and banners and assembled to march through the streets of Dawei, a small city in southeastern Myanmar that has seen almost daily large demonstrations against the coup.

Some of them also carried metal shields, an apparent response to the possible use of tear gas canisters and rubber bullets by police. On Sunday, Dawei was the scene of a violent crackdown with up to five people killed when security forces shot into a large crowd of demonstrators.

The coup reversed years of slow progress toward democracy in Myanmar after five decades of military rule, coming the day a newly elected Parliament was supposed to take office. Ousted leader Suu Kyi’s National League for Democracy party would have been installed for a second five-year term in office, but instead she was detained along with President Win Myint and other senior officials.

The military government has charged Suu Kyi with several criminal offenses that critics say are politically motivated and are meant to keep her locked up. If convicted of any of the charges, she would probably be barred from taking part in the election promised in a year’s time by the military.

Following her detention on the day of the coup, the 75-year-old Suu Kyi was initially held at her residence in the capital, Naypyitaw, but members of her party now say they don’t know where she is.

“Words of condemnation are necessary and welcome but insufficient. The world must act. We must all act,” the U.N.’s independent expert on human rights in Myanmar, Tom Andrews, said in a separate statement.

He proposed that countries could institute a global embargo on the sale of arms to Myanmar and “tough, targeted and coordinated sanctions” against those responsible for the coup, the crackdown and other rights abuses.

Any kind of coordinated action at the United Nations, however, would be difficult since two permanent members of the U.N. Security Council, China and Russia, would almost certainly veto it. ASEAN’s policy of seeking a consensus among it members also makes it unlikely to take strong action.

Some countries have imposed or are considering imposing their own sanctions. In Washington, White House National Security Adviser Jake Sullivan issued a statement saying the U.S. is “alarmed” by the violence and stands in solidarity with Myanmar’s people.